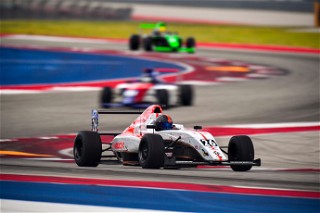 The Formula 4 United States Championship Powered by Honda staged its first race at CoTA in 2017 with WEC and Formula 1. It’s been a staple on the F4 U.S. schedule ever since. Last season during the United States Grand Prix, it broke a world entry record, fielding 38 F4 drivers from around the globe.

There is a steep, uphill run into the hairpin Turn 1, which has become the venue's signature corner. Turns 3 through 6 look not dissimilar to Silverstone's high-speed Maggotts/Becketts; Turns 12 through 15 give a nod to Hockenheim's stadium section; and Turns 16 through 18 will mirror the famous, multi-apex Turn 8 at Istanbul Park.

23 cars made up of 14 rookies, 9 veterans from five countries

All three races will be live streamed on www.FANRacing.Live, available to a worldwide audience. Official Practices and Qualifying will not be live streamed, however, fans can still follow lap times on the Race Monitor App or by clicking here.

Due to recent COVID-19 mandates made by Travis County, the race track will remained closed to all non-essential staff and crew members. Spectators will not be allowed to attend