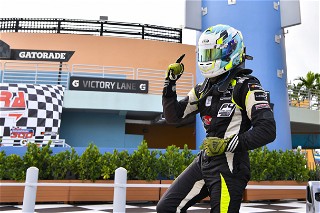 It was a winning weekend for Team Crosslink in the F4 United States Championship Powered by Honda as Jose Blanco picked up a pair of victories at the Homestead-Miami Speedway. With fast laps in both wet and dry weather conditions all weekend long, the second-year competitor had a career best weekend as the series now shifts its focus to the final event in two weeks at the Circuit of the Americas.

“Great weekend for Jose and the F4 side of our program,” explained Sean Owens, who could not be on site in person this week. “We are hitting our stride now but unfortunately it is a little late in the season. We will use this momentum and look forward to seeing what we can do in Texas in a few weeks as well as we move onwards into 2021.”

Blanco scored the fastest lap of race one as he drove to the front of the field taking the first checkered flag of the weekend and his second win of 2020. As one of the few drivers in the field with a lot of wet weather experience, Blanco was able to turn his knowledge into speed to climb to the top step of the podium, as well as secure the pole position for round fourteen.

2019 F4 Champion Josh Car had a trying first race as an off and contact damaged the front wing forcing him to pit lane for a change. After the series scrubbed qualifying due to standing water on the track and lined the grid by championship points, contact sent Car down the running order to an eventual eleventh place result.

Blanco made it two-for-two on Sunday morning as he dominated the second wheel-to-wheel action of the weekend to score his second win of the weekend. With a caution late in the race closing the overall race gap, Blanco was more than three seconds ahead of his competition before the yellow flag flew. Along with the race win, Blanco also secured the fastest lap and pole position for the third and final race of the weekend.

Battling for the lead in race three, Blanco and the eventual race winner made contact sending Jose through the grass and down the running order to eleventh. Taking advantage of caution periods throughout the race and with his sheer speed to drive back through the field, Blanco worked his way back forward to score his third podium result of the weekend with a third-place result, but was elevated to second after a post-race penalty.

FR Americas competitor Joshua Car had a trying weekend in his #2 entry. Lacking the necessary speed to run at the front of the field, Car and Team Crosslink will regroup before their home event in a few weeks’ time at the famed Circuit of the Americas.