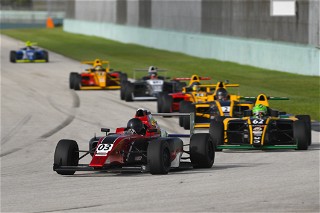 With the 2020 F4 United States Championship Powered by Honda season nearing completion, three Alliance Racing drivers were in action this past weekend at the Homestead-Miami Speedway in Homestead, Florida. Taking on the road course layout inside the Speedway, the trio gained more experience as Hayden Bowlsbey was able to secure a tenth-place finish in the final race, the best result for the team on the weekend. With the series finale on the horizon in only two weeks’ time, the focus now shifts to entering the off season with some momentum as several seats will open up for the Alliance Racing 2021 program.

The first race of the weekend would take a while to get going as a storm moved through the area aborting the start and delaying the race until later in the day. With more weather moving into the area and conditions deteriorating throughout the thirteen-lap race, Will Holtz was the biggest mover of the three Alliance Racing drivers advancing forward four positions to finish 13th, finishing less than a second behind ninth place starter Hayden Bowlsbey with Will Edwards finishing in 18th. With standing water, surviving was the name of the game as all three drivers gained experience and will take that new knowledge onwards in their careers.

Holtz scored Alliance Racing’s best result in Sunday morning’s wheel-to-wheel battle with a 12th place result, missing out on the points by only two positions. A late race caution with five minutes remaining halted any further progress forward as the race ended under yellow flag conditions. Hayden Bowlsbey remained consistent on the weekend with a 14th place result while Will Edwards drove forward to cross the line in P16.

Hayden Bowlsbey would break through in the third and final race of the weekend to crack the top-ten and add to his 2020 point total. Finishing tenth on track, Bowlsbey was able to secure the team’s best result of the weekend and leave the Homestead-Miami Speedway with some momentum. Will Edwards secured a 13th place finish while Will Holtz ended his weekend in 18th.

“We make no bones about it, but it was a tough weekend for us in Homestead,” explained Will Edwards. “Two weeks on the road, some nasty weather and some issues kept us from where we deserve to be on the results sheet. The positive is that our drivers and crew never gave up and pushed 100% all the time. We will head back to our shop in Indianapolis and regroup for the final race of the season.”

Heading back to their home base in Indianapolis, Indiana, Alliance Racing will prepare for the 2020 F4 United States Championship Season Finale at the prestigious Circuit of the Americas in Austin, Texas over the October 23rd – 25th weekend.

With several affordable testing opportunities coming up in the next six weeks, Alliance Racing and ADDA have seats available for you.