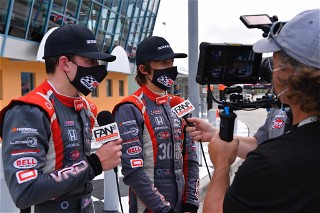 Yeany, the unofficial 2020 champion, started on pole but lost position to Jose Blanco on the opening lap. The pair diced around the Roval before locking wheels which sent Blanco flying off course. Yeany continued in first while Blanco recovered in 12th position.

Starting fifth, Evans got the jump on Row 2 starter Spike Kohlbecker on the first of four restarts to take third. He inherited second after Blanco's off course excursion and nearly took first when Yeany locked wheels with Blanco. In the end, Evans finished in second, his best result of his F4 U.S. rookie season.

The multiple restarts played to Blanco's favor. After falling to 12th, Blanco rocketed through the field making up several positions as the track switched back to green flag racing. The final restart was a three-lap shootout to the finish. Blanco hunted down DEForce rookie Nico Christodoulou, who held down third for a majority of the 30-minute session. On the white flag lap, Blanco forced Christodoulou back to fourth, slotting into the last podium position. The drive earned Blanco the Omologato Watch Perfectly Timed Move of the Race.

Yeany locked up the championship after his second-place finish earlier in the day (results unofficial).

*based on provisional results