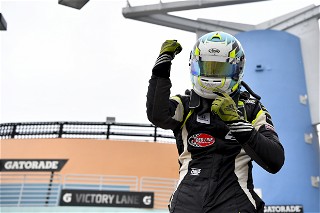 Following an initial cancelation of the race earlier in the day due to inclement weather, the Formula 4 United States Championship Powered by Honda got in an abbreviated Race 1 at Homestead-Miami Speedway late Saturday afternoon after lightening shortened the makeup round.

Jose Blanco charged from a one second deficit early in the race to take the checkered by .739-seconds ahead of championship points leader Hunter Yeany. The victory marks the Crosslink/Kiwi Motorsport driver's second win of the season, and keeps his bid alive for the 2020 championship.

"I am really excited to be back in the winners circle," said Blanco. "I really like this track and racing in the wet conditions was challenging but really fun."

After taking the lead on the restart from race-long leader Spike Kohlbecker, Yeany fell to Blanco when his Velocity Racing Development machine got sideways after hitting standing water in Turn 1. The rookie recovered but continued to play catch up to Blanco the rest of the race.

"At that point, my fight was with Dylan (Tavella) since he's the closest to me in points," said Blanco. "In that moment I had to just think about the championship and not the win."

Dylan Tavella crossed the line third after starting fourth. The Crosslink/Kiwi Motorsport driver was down in power, missing one cylinder, but the wet weather worked in his favor not affecting his racing efforts on Saturday.

"We thought we were going into the weekend with a disadvantage, but the wet weather worked in our favor," explained Tavella. "We kept our championship efforts alive today, and we will see what tomorrow brings, a big thanks to my team Crosslink/Kiwi Motorsport."

Pole-sitter Kohlbecker finished the race in fourth followed by DEForce Autosport rookie Nico Christodoulou in fifth, his best result of the season.

The F4 U.S. drivers close out their Florida swing on Sunday with a pair of 30-minute races at 9:00am ET and 12:50pm ET. Stream live at FanRacing.Live