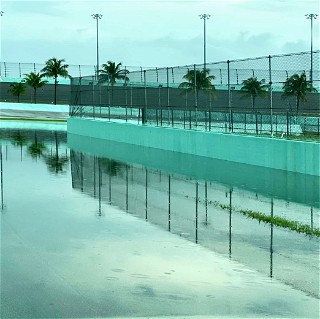 Rain and lightening moved in the Miami area on Saturday afternoon, soaking the Homestead-Miami Speedway circuit. The downpour lasted for nearly two hours, causing track flooding. Due to the amount of rain received in the short time period, Turn 6 drains backed up and the standing water laid stagnant on the track. The issue forced series officials to cancel Race 1 for the Formula 4 United States Championship Powered by Honda. The makeup round will be announced later this weekend.