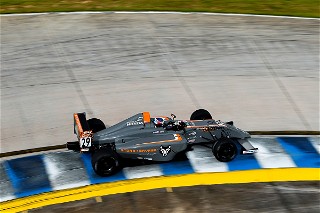 With a wave of confidence heading to the Sebring International Raceway and rounds ten through twelve of the Formula 4 United States Championship Powered by Honda, Erik Evans earned his career best finish with a third-place effort on Saturday while he added another top-five with a fourth-place result Sunday morning.

"It was a good weekend and the results continue to come with all the hard work that we are putting into the program," explained Evans. "I have worked so hard this year and we are finally in the positions that we deserve to be in. A huge thanks to the Velocity Racing Development staff, my family and of course Storm & Savage Apparel for all of their help, hard work and continued support."

After starting Saturday's first wheel-to-wheel action from the seventh position, Evans quickly found his way forward to P2 by the time the first caution flew on lap two. Stalking the leader while trying to hold his competitors at bay, Evans fell one position to third as his Velocity Racing Development teammate managed to sneak by as the duo moved to the first and second positions a few laps later. In a last lap for the ages, Evans finished third, a scant .194 behind the race winner to score his first career podium.

Returning to the track Sunday morning and with heavy rain overnight, a slight delay in the schedule would see the second race of the weekend pushed back one hour. With the third fastest lap time from Saturday, Evans would slot into the third position for the start of the race and moved into second when the lights went green. Battling the leaders all race long, Evans held his own at the pointy end of the field and eventually finished fourth when the final checkered flag flew.

Looking to keep the momentum going that afternoon, Evans was solidly inside the top-ten until an over aggressive driver forced the #29 Storm and Savage machine off track and out of the race. Reprimanded for his actions following the conclusion of the event, the offending competitor received a thirty second time penalty for his driving standards.

"I was pushing really hard in race three and I was further back in the top-ten than I would have liked to be," Evans added. "With some dirty air from the cars in front of me and tires that were lacking grip, the incident in the final race cost me a triple points scoring weekend. While the highs are high and the lows are lows, it is good to take the positives out of the weekend as we shift the focus to next week in Homestead."

With little time off between events, Erik Evans will head south to the Homestead-Miami Speedway this coming weekend. With a Promoters Test Day planned for Thursday, official competition will get underway Friday through Sunday as the Storm & Savage Apparel supported driver looks to build on his success from this past weekend in South Florida.