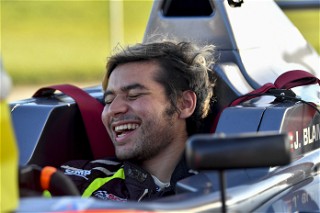 In the final laps of the Formula 4 United States Championship Powered by Honda qualifying session, Jose Blanco set a new track record at Sebring International Raceway, laying down a flyer of 2:13.153-seconds on the checkered lap. Blanco held the original F4 U.S. record set in 2019 (2:13.641-seconds).

The feat earned the No. 32 Art-Draft Authority/ LVP Paint Crosslink Competition driver pole position for the opening round.

DEForce Racing rookie Nico Christodoulou held the top time in the 30-minute qualifying session for the first few circuits, but as championship contenders Hankook Tires came to temperature, Christodoulou fell down the order, allowing Dylan Tavella to take the top spot. Tavella, piloting the Crosslink/Kiwi Motorsport No. 14 Mordfin Group / Lebenthal Global Advisors / Argyle, held the top time until Blanco bested him in the second to last lap of the session. Knowing he had limited time to take back the pole, Tavella set his personal best lap of 2:13.478-seconds, but it was not enough to retake the point from the Puerto Rican pilot.

DC Autosport rookie Josh Sarchet (2:13.653-seconds) will head Row 2 with series newcomer Race Liberante (2:13.897-seconds) starting in fourth. Liberante joins F4 after decades of racing on short tracks, in sports cars and a long career in karting on the newest team in the paddock, RJ Racing.

Alliance Racing driver Hayden Bowlsbey and Crosslink/Kiwi Motorsport rookie Spike Kohlbecker will take the green from Row 3 while Floridian Jeremy Fairbairn and Erik Evans will start in seventh and eighth.

Points leader Hunter Yeany experienced mechanical issues waiting on pregrid and spent most of qualifying in the pits. With eight minutes remaining on the clock, Yeany turned his first laps and laid down the sixth fastest time, but a post-qualifying penalty demoted him to ninth.

The drivers will take the green for Race 1 on Saturday at noon.

Stream the action live at FanRacing.Live