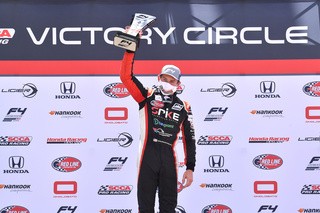 Showing his front of the field pace throughout the four wheel-to-wheel events, Kohlbecker finished fourth in race one, third in race two and managed to work his way to the top step of the podium in Sunday morning's third race of the weekend. Scoring his first win of the year, the Kiwi Motorsport driver backed up his win with a second-place result in round four, claiming a good points haul to slot himself third in the driver's championship.

Dylan Tavella currently sits second in the overall championship points battle and has already been to the top step of the podium in 2020. Looking to carry that momentum to Barber Motorsports Park, Tavella accounted for three top-five results including a fifth-place finish in the first and fourth races on the weekend as well as a fourth-place result in Saturday afternoon's wheel-to-wheel action  Sunday morning, starting from the eleventh position, Tavella was able to pull off some great race passes to advance forward to a sixth place finish.  He will be looking forward to returning to the podium in Sebring, Florida at the end of September.

With the goal of being more consistent while scoring stronger race results, Varun Choksey did just that in Leeds, Alabama. With a seventh-place result on Saturday morning, Choksey went on to claim a trio of ninth place results to score four top-ten finishes. With points in each and every race over the weekend, Choksey has firmly entrenched himself in a battle for the top-ten sitting twelfth, only ten markers back from the current eighth place competitor.

Ronan Murphy claimed his first F4 United States Championship Powered by Honda point in Saturday afternoon's event gaining eleven positions from his 21st place starting position to finish tenth. With a 12th place result in race one, Murphy is constantly progressing further and further up the running order and has the goal of more points in the events to come.

Courtesy of partner team Crosslink/Kiwi Motorsport driver Jose Blanco, who garnered a race win and third place finish over the weekend, the Kiwi squad sits 72 points ahead their next closest competitor in the F4 United States Championship Powered by Honda Team Championship.

Dylan Tavella: "Didn't achieve the goal I set for myself but having the team lead in the championship points makes up for it."

Spike Kohlbecker: "Barber was a new track for me, but the Kiwi Team and I came mentally and physically prepared, especially my mechanic who is the hardest-working mechanic in the pits. My incredible engineer and I had my car dialed in and we dominated all of Friday's practices, so we felt we'd be quick in qualifying. Unfortunately, when qualifying came up it started pouring rain. The series made the call to cancel qualifying and I felt robbed of the pace I could've shown in the wet. This being the situation for Race 1, we would start where we sit in the points championship in P5. My race was strong, and I moved up one position on the last lap to finish fourth at the end of Race 1. In Race 2, I was all over the car that was in second place. Barber is not an easy track to pass on, but I gave it a few shots and had a great battle until the safety car put an early end to the race - we crossed the line in P3. After accomplishing the fastest lap in race two, I started on the pole position for race three and lead every single lap of the race defending my position in what proved to be an incredibly exciting race for drivers and fans. We finally got to show our true pace, at a track we had never been to no less, and ultimately went on to get my first F4 US race win. Once again, we nailed the setup for the cold morning. It was awesome winning at such a crazy cool track as well. I was also really happy to win in front of my grandma as she has just recovered from a major surgery.

Now coming from a great high of my first win, it was time for race four. In the opening laps, my speed was crazy, once again thanks to my team for a perfect setup. I battled for first and second through the entire race. We made a pass on the leader on lap four that should have stuck but eventually finished second. The overall weekend was a solid improvement. I was super pleased and felt like it was one of the better race weekends I've had. Now I'm excited and training hard to see what Florida tracks have to offer. Like Barber and VIR, I've never seen the tracks we're going to be on for the back half of the season, but I'm ready. I love the challenge of trying to figure out a new track quickly."

Ronan Murphy: "Due to the storm meant no qualifying, so we all had to start the race from our championship points position. From 21st on the grid, I had a good start and passed a handful of cars on the opening laps and worked my way to a 12th place finish. Race 2 was a highlight coming from 21st to tenth scoring that critical championship point. I learned a lot about my driving, elevation changes and blind turns, something we don't have at our New Zealand racetracks. I am looking forward to Sebring in a few weeks' time for a solid start to the second half of the season."

Varun Choksey: "The third event weekend at Barber was a stronger showing from me. We picked up points in all four races and I fixed some issues from VIR. I'll be looking to improve further at the next rounds in Florida."

Crosslink/Kiwi Motorsport will return to the track in September with a pair of races in the Sunshine State. Taking on the Sebring International Raceway during the last weekend of the month, Kiwi drivers will then transition to the Homestead-Miami Speedway for the penultimate round of the F4 United States Championship Powered by Honda.