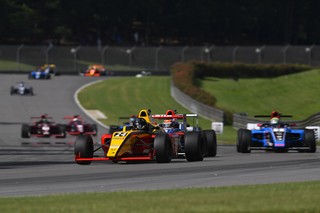 Group-A Racing leaves its first trip to Barber Motorsports Park with a top-five and multiple top-10 results, giving the team a good bag of points into the mid-season break.

The incredibly scenic Barber Motorsports Park is a new venue for both the Formula 4 United States Championship Presented by Honda and Group-A Racing team. While most of its competitors tested at Barber during the COVID-19 shut down, nobody from the Group-A Racing camp participated in the test due to domestic and international travel restrictions. While going in behind, the team's extremely deep engineering staff was able to rely on previous trips to the Birmingham facility in other championships to facilitate setting up the cars.

Practice showed promise for the Group-A Racing drivers, having done a lot of prep work on the simulator with Group-A Racing team manager and driver coach Jonathan Scarallo. Unfortunately, very nasty weather with flooding and high winds moved into the Birmingham, Alabama, area late Friday afternoon causing qualifying to be canceled. Series officials decided to grid the field for Race 1 based on championship points.

Rivers had a great back and forth battle at the front of the field with the drivers trading positions constantly, with Rivers running as high as fourth at one point and finishing sixth. Myers found himself in a bit of an isolated island in his race and Torres collided with a spinning car on the opening lap of the race causing a DNF.

The team made a series of changes to the cars to help stay on top of the notoriously high tire degradation experienced at Barber Motorsports Park. Race 2 saw the team's drivers starting a bit farther back than preferred with Rivers 12th, Myers 23rd and Torres 28th. All three drivers had great races moving up numerous spots in the ultra-competitive F4 U.S. field. Rivers moved up five positions from 12th to seventh for yet another points-paying result. Myers moved up five positions as well from 23rd to 18th and Torres was up nine spots from 28th to 19th.

Race 3 grid, set on the previous race’s fastest lap, saw Rivers starting fourth, Myers 19th and Torres 25th.  Rivers had yet another exciting battle at the front of the field, vying for a podium position the entire race. Rivers came home with another top-five result finishing fourth, making it a three consecutive points scoring result for the very young rookie.

Myers did not move up, but his race pace drastically improved in the race from the day prior, causing him to threaten the cars in front, a very positive sign of him applying coaching provided from the team and good series of changes to the car for the Jamaican. Torres also finished the race where he started.

For first time in history, the weekend saw a fourth race on the same weekend, making up for the rain out race at Mid Ohio the month prior.

Rivers grided up in the top-five. An early race spin dropped him all the way to the rear of the field. When the team needed a full course caution, this event unfortunately never saw one, going green the entire time. This made life difficult for Rivers, as he consistently set the same lap times as the eventual winner, leaving a ‘what if’ mindset for the team and driver. The incredibly strong pace for the Group-A Racing driver in the caution-free race was a true testament to the team's engineering staff and how they set the cars for the incredibly high tire degradation track. The shared data files amongst the series showed the Group-A Racing machine of  Rivers the fastest of all competitors in the high speed sectors of the track.

At the same time, Myers got stuck behind a slower car at the beginning of the race but finally got past mid-race. After that, he saw a massive improvement in his race pace in comparison to the leaders. Sadly, for the Jamaican the final race results didn’t truly tell the story of how much his race pace improved each race during the event.

Torres saw a good step in the positive direction, with the extra track time, as well as moving up five positions from his grid spot to where he finished.

“All-in-all, I can’t really ask for much more for the team and drivers” said team manager Scarallo. “We naturally came into this event a bit behind having never been here with F4 and with all rookie lineup, plus William recovering from a big crash to finish the last event just one week ago. All three boys made tremendous progress, Nicholas at the very front of the grid all event and the race pace from all three was vastly improved in the caution free race to end the event. This is a good break for all the coaching and information to soak in to their heads from the compact first half of the season to then apply for the second half.”

The team now goes into the mid-season break with seven weeks to get prepared for the Sebring International Raceway. Drivers interested in test & race opportunities contact Jonathan Scarallo 631-974-4379 info@GroupARacingTeam.com.