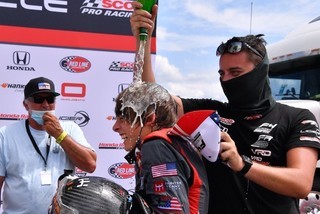 Full Report to Follow Hunter Yeany ended the weekend how he started it, with a win at Barber Motorsports Park in the all-green Race 4. The victory marked Yeany's fourth points-paying win of the season (fifth win overall) in Formula 4 United States Championship Powered by Honda.

The Velocity Racing Group rookie crossed the line nearly two seconds ahead of second-place finisher Jose Blanco, but the race started out with a three-way battle for first between Yeany, Race 3 winner Spike Kohlbecker and Race 2 winner Jose Blanco.

Grouped in a pack, the trio diced for position. On Lap 3, Kohlbecker tried to use deep braking on Yeany's outside in Turn 7a. Yeany quick to defend, stopped Kohlbecker's attempt. This left the door wide open for Blanco to slip to the inside to claim second. Kohlbecker then went to work on his Crosslink/Kiwi Motorsport teammate, forcing Blanco to switch his focus from fighting for first to defending second. The pair lost ground to Yeany as they fought for position. The battle went down to the checkered with Blanco crossing the stripe just .067-seconds ahead of Kohlbecker.

After nine races in six weeks, the F4 U.S. drivers will get a month-long break before heading to Florida for another triple-header at Sebring International Raceway September 26-28.