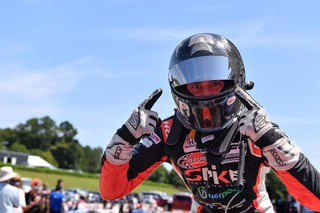 Kohlbecker was promoted to pole-position after Jose Blanco received a technical infraction in Race 2 that sent him starting from pit lane. After a car stalled on the line, the F1-style standing start was aborted and the field was forced to make its first rolling start of the season.

Kohlbecker held off Yeany through two restarts, and during a last-lap shootout, Yeany tried several moves on Kohlbecker, but they didn't stick as Kohlbecker crossed the stripe 0.041-seconds ahead of the Velocity Racing Development rookie.

Using the multiple restarts to his advantage, Blanco (Crosslink/Kiwi), finished just outside of points-paying position in 11th, passing a total of 15 cars along the way.

F4 U.S. wraps up its Barber weekend with Race 4 at 1:30pm CT. Watch live at https://fanracing.live