NEWS FLASH: Jose Blanco Returns to the F4 Podium with a Win 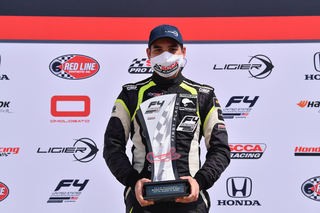 Blanco started off pole-position beside Nico Christodoulou (DEForce Racing) in Row 1 and was leading the pack of 31-F4 U.S. cars by the end of Lap 1.

Working as a team, Jay Howard Driver Development rookies Bijoy Garg and Sam Paley swarmed Blanco in the opening laps, trying to throw the Puerto Rican pilot off his game, but, Blanco stayed cool under pressure.

"We nailed it today," said Blanco. "When you're in first place the last thing you want to see is a restart, but I was able to hold onto position. Thank you to the Crosslink Competition guys, my family and everyone watching me back in Puerto Rico. This win is dedicated to you."

Paley, who started the race in fifth, advanced to second as Garg lost steam in the second half of the race. The Kentucky native fended off a challenging Spike Kohlbecker (Crosslink/Kiwi) to finish Race 2 on the podium in second, earning a pair of second-place finishes for the day.

Dicing for position, Kohlbecker was stuck to Paley's gearbox the entire 30-minute session, but his efforts went unfruitful as the track switched to yellow and ended under caution before he could pass.

This was the first podium of the season that didn't feature either Hunter Yeany (Velocity Racing Development) or Dylan Tavella (Crosslink/Kiwi). The pair still finished in points-scoring position with Tavella placing fourth and Yeany in sixth.

Garg ended the day in fifth, his best result of the season.

The weekend culminates on Sunday with two additional races (9:50 a.m. and 1:30 p.m.). The four-race F4 event will be open to fans. Tickets are only available at the gate, $20 per day or $35 for the weekend,the event is cashless, only debit and credit cards will be accepted.