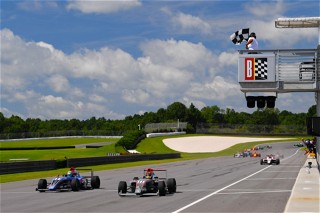 In a photo finish, Yeany crossed the stripe just .101-seconds ahead of the Jay Howard Driver Development rookie.

"That race was tough," said Yeany. "The VRD crew gave me a great car that could survive in this heat. I knew we could come away with another win."

Paley used the two restarts to his advantage, rocketing from a 10th-place starting position to finish second, marking his maiden F4 podium.

It was a tough race for the Crosslink/Kiwi Motorsport drivers. Pole-starter Dylan Tavella (Crosslink/Kiwi) lead all but the last three laps of the race, skidding off track on the final restart after the track went cold from a red flag.

Early podium contender Jose Blanco (Crosslink/Kiwi) brought out the first full-course caution after he and Yeany made contact entering Turn 16. Yeany continued but Blanco's No. 32 machine was left stranded in the gravel trap, ending his race. The incident between the two drivers is under investigation.

The F4 U.S. drivers return to action later Saturday afternoon for Race 2 at 2:15 p.m. The weekend culminates with two additional races (9:50 a.m. and 1:30 p.m.). The four-race F4 event will be open to fans. Tickets are only available at the gate, $20 per day or $35 for the weekend,the event is cashless, only debit and credit cards will be accepted.