F4 U.S. Storms into Barber with a Four-Race Circuit Debut 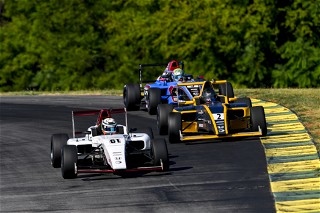 Fans will get a massive dose of single-seater action with F4 U.S. staging a four-race weekend in its first outing to the 880-acre Alabama circuit. Originally slated as a triple-header, an extra race was added to the schedule after inclement weather ended Round 1 at Mid-Ohio Sports Car Course prematurely.

The stout 31-car field, made up of 24 rookies, seven returning veterans representing 17 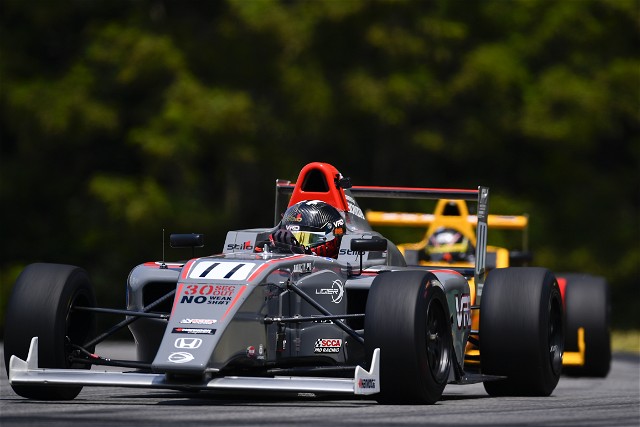 states and seven countries, will still participate in two official practices and a qualifying session before racing commences on Saturday. Each round will be 30-minutes, offering significant seat time for the development series drivers. (Entry List)

Even with the additional round, tire rules remain unchanged, allotting teams two sets of Hankook tires to manage throughout the weekend.

“I’m very excited for our drivers this weekend to race on one of the most competitive and picturesque tracks in the country,” said F4 U.S. Race Director Scott Goodyear. “Barber Motorsports Park is challenging for drivers both mentally and physically because of the rolling terrain and the blind turns. With F4 drivers haveing an extra race this weekend, drivers will have to manage both their physical energy and their tires to make sure they have something left for Race 4.”

Velocity Racing Development rookie Hunter Yeany leads the championship with a 15-point advantage heading into the weekend. At Mid-Ohio, Yeany raced his way to podium finishes in both races, ending his debutant F4 U.S. event with first and second place results. Two weeks later, the 15-year-old standout topped his opening weekend with a pair of wins and a second-place finish at Virginia International Raceway. (Championship Points)

"I'm looking forward to racing at Barber and with the challenge of continuing my win streak," Yeany said. "The track's elevation changes make it a great driving experience and provides for some great racing. This is one of my favorite facilities in North America and an event I have been looking forward to for quite some time." 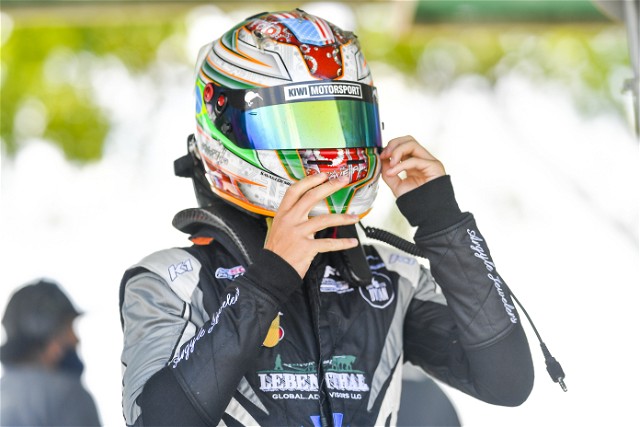 Yeany’s winning momentum will be challenged by a field of competitors looking to spoil his championship campaign, especially by Dylan Tavella. Tavella upset Yeany’s chance at sweeping the weekend at VIR by casting a baiting move on Yeany in Race 2. Yeany took the bait, allowing Tavella to slide into lead and take the victory. (Watch the Move)

“We left Virginia second in the championship; it wasn’t the weekend we were hoping for, but we are standing strong with the focus on scoring as many points as possible at Barber,” said Tavella. “Since leaving VIR, I’ve been training 10 hours a day on the simulator, preparing for Barber and studying the circuit since I’ve never raced here before.”

Veteran F4 U.S. pilot Jose Blanco was a strong preseason favorite, but the Puerto Rican has faced a tumultuous start to his 2020 season. Blanco recovered from a set of unfortunate events that put him out of podium contention to claim two third-place finishes at VIR. The results landed the Crosslink/Kiwi driver third in the points table ahead of the weekend.

Kohlbecker was edged out of a pole-position start by .080-seconds by Yeany during qualifying at VIR. The Crosslink/Kiwi rookie followed up his qualifying performance with a second-place finish in the opening VIR round, but a race-ending wreck in Round 4 forced Kohlbecker to miss Round 5, forfeiting his chance at another podium finish. Rookie Rivers brought Group-A Racing back to the winners circle at VIR in Round 4, charging 11 positions to a second-place finish, followed by DC Autosport rookie Sarchet who finished third in the same race.

McKee will be fighting for his first podium result of the season at Barber. The Iron Rock Motorsports rookie has improved every circuit, finishing each race with better results than the last. Driving for the only single-car team in the paddock, McKee has scored points in every round, slotting him fourth in the championship. McKee is the only driver in the top-five without a podium finish, and he hopes to change that at Barber.

The official F4 U.S. Championship weekend kicks off on Friday with a pair of practices before qualifying at 4:20 p.m. Saturday opens with the first of four races starting at 9:50 a.m. followed by Race 2 at 2:15 p.m. The weekend culminates with two additional races (9:50 a.m. and 1:30 p.m.). The four-race F4 event will be open to fans. Tickets are only available at the gate, $20 per day or $35 for the weekend, the event is cashless, only debit and credit cards will be accepted. 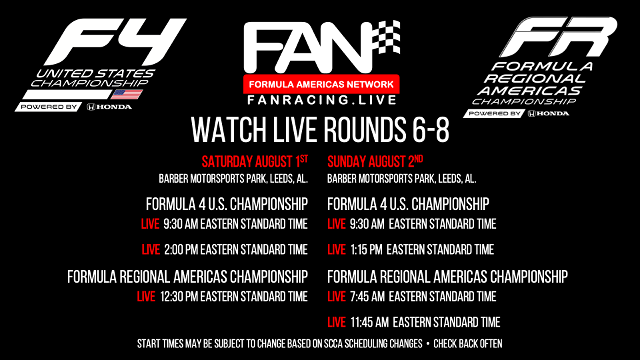