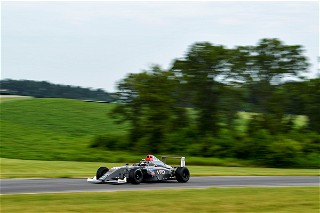 July 29, 2020 - Race weekend number three is in our sights and rookie driver Hunter Yeany isn't showing any signs of slowing down. In the season opener at the Mid-Ohio Sports Car Course, Yeany raced his way to the podium in both races ending his weekend with first and second place results. Much like the first event of the season, Yeany claimed a full podium sweep at the Virginia International Raceway (VIR) two weeks ago including a pair of wins and a third-place result. Three wins and five total podiums slingshot Yeany into the F4 United States Championship Powered by Honda championship points lead.

This is the first year in the F4 series for the Virginia-based driver, and he continues to express excitement about the upcoming season. Yeany along with his team, Velocity Racing Development (VRD), are looking forward to not one or two events, but four wheel-to-wheel races this weekend at picturesque Barber Motorsports Park in Birmingham, Alabama.

"I'm looking forward to racing at Barber and with the challenge of continuing my win streak," Yeany explains. "The track's elevation changes make it a great driving experience and provides for some great racing. This is one of my favorite facilities in North America and an event I have been looking forward to for quite some time."

Yeany has received an overwhelming amount of support from fans, friends, family and marketing partners since the start of the season. A huge thanks to Velocity Racing Development, Thirty Seconds Out - a commando inspired clothing line started by former Special Operations Seal Sean Evangelista, and Torq Racewear for their continued support.

You can watch Hunter Yeany drive for more race wins this weekend at Barber Motorsports Park via the FANRacing.live website and you can find the weekend schedule at f4uschampionship.com.

For more information on Hunter Yeany, please contact Dan Mitchell at dan@danmitchellmotorsports.com or follow him via his social media channels.