10 Fast Facts You Need to Know Ahead of Barber 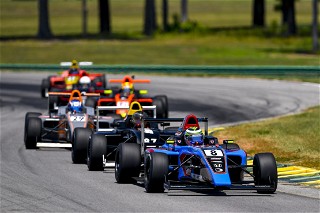 1. Has F4 U.S. ever raced at Barber Motorsports Park in the past?

No, this is the first time that Formula 4 United States Championship Powered by Honda will race at the famed Barber Motorsports Park.

2. Is the event open to spectators?

The event and paddock will be open to spectators with local and state COVID-19 protocol in order. Tickets are only available at the gate, $20 per day or $35 for the weekend, the event is cashless, only debit and credit cards will be accepted.

The SCCA Pro Racing paddock (FR Americas/F4 U.S.) will require all fans to wear a mask upon entering.

3. Are there any special procedures in place to enter the event?

Yes, all fans, teams, drivers and crew members will have to sign a track COVID-19 waiver. Once that is signed, an armband will be given out that has to be worn throughout the weekend. Without that armband, attendees will not be allowed through the gates.

4. What is the racing format this weekend?

This weekend's schedule will be a bit different than a typical F4 U.S. weekend. The drivers will have four races between Saturday and Sunday. The last race on Sunday will be a make-up round from Mid-Ohio. Inclement weather ended Round 1 at Mid-Ohio early. The race did not meet the FIA lap rules to be considered a championship race, so it did not count for points.

All races will be 30-minutes in length, but each race has an hour block so officials can stop the clock if there are long periods of cautions or red flags. This will allow for more green flag racing.

Drivers will still have two 30-minute practices and one 30-minute qualifying.

5. With an expanded schedule, will the tire rule change?

No, tire rules will stay the same. Each car will have two sets of Hankook tires to manage for four races and and qualifying. Teams are allowed to use leftover tires from VIR for the two practices.

6. Will there be an autograph session?

Adhering to the Alabama state and local CDC and Health Department protocol, F4 U.S. will not stage an autograph session. In order to limit contact, SCCA Pro Racing asks for fans to not approach drivers to sign items, some drivers will have pre-autographed hero cards at their trailers. If fans would like a selfie with their favorite driver, there will be stickers on the ground in front of the driver's paddock space that indicate safe spaces for photo opps.

7. Will the event be streamed?

All four races will be live streamed on www.FANRacing.Live, available to a worldwide audience at no charge. Official Practices and Qualifying will not be live streamed, however, fans can still follow lap times on the Race Monitor App or by clicking here.

Barber Motorsports Park is an 880 acre, multi-purpose racing facility located on the eastern fringes of Birmingham, Alabama. It was built by George Barber and includes the Barber Vintage Motorsport Museum, which has been named “World’s Largest Motorcycle Museum” by the Guinness World Records.

Barber opened in 2003, has a 17-turn, 2.38-mile (3.83 km) road course, designed by Alan Wilson, and is viewable from several naturally wooded or grass-covered banks. The track is designed to be run clockwise. The layout is compact, with a number of elevation changes. The pit lane is to the outside of the track, parallel to the front stretch, and the pit wall is on the driver’s left. Two cutoff turns, which are barricaded when not in use, allow the track to be shortened for club events or testing sessions. An entryway between Turns 8 and 9 provides access to the museum garages. A tunnel underneath the track at Turn 12 allows emergency and maintenance vehicles access to the infield area.

9. What is the field size for the event?

31 cars made up of 24 rookies, 7 returning drivers, representing 7 countries and 16 states.

10. What are the championship standings entering the weekend?