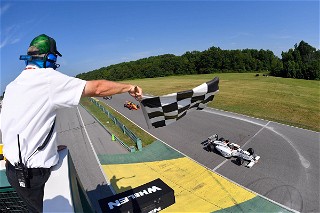 July 28, 2020 - Two wins, five podiums and six top-five results highlight the start of the 2020 F4 United States Championship Powered by Honda for Kiwi Motorsport. Dylan Tavella lead the way for the Texas based squad with two wins and three podiums while additional podium finishes have been delivered by Spike Kohlbecker and Ronan Murphy with Varun Choksey adding a top-ten, showing the true diversity and speed across the Kiwi Motorsport driver lineup.

"It has been a good start to the 2020 season, but we want more," explained Kiwi Motorsport's Teena Larsen. "Our goal has always been race wins and podium results, but we have our eyes on the championship at the end of the season as well."

With results from round two at Mid-Ohio made official just last week, Dylan Tavella was granted the race win after finishing third on track. Showing speed with a legal car, Tavella was elevated to the top step of the podium after competitors' cars were found to have illegal components in post-race technical inspection. Placing three drivers solidly in the top-ten, Spike Kohlbecker and Varun Choksey were classified fourth and sixth respectively.

With the quick turnaround, Kiwi Motorsport was off to the Virginia International Raceway (VIR) less than three weeks later for rounds three, four and five of the 2020 season. Taking advantage of a Promoters Test Day on Thursday that provided drivers with an additional two hours of track time, Kiwi Motorsport fine-tuned their equipment to get the most speed possible at the fast but technical VIR circuit.

Spike Kohlbecker found his way to the podium in round three with a second-place result as his trio of teammates struggled with on track contact to finish down the running order. Regrouping for the second two wheel-to-wheel events of the weekend on Sunday, Tavella rose to the top stealing the race win with a late race pass while Kohlbecker garnered another top-five result in fourth. Tavella returned to the podium in round five with a second-place finish and was joined on the blocks by Ronan Murphy as he earned a third-place result and his first podium result of 2020.

Spike Kohlbecker: "It was great to be back in the car at VIR which is a very long flowing track with very few hard-braking zones. It was also awesome that we had some extra testing on Thursday as this gave my engineer Tim, my mechanic Ryan, and I time to dial in the car and my driving. We were good right from the beginning, and we had a very quick car both in the wet and dry, and the weather was constantly changing. In the end, the weather was dry for qualifying. We popped off one quick lap time right at the beginning of the session missing out on pole by six hundredths of a second. A bit frustrating, but I was still excited to start on the front row. We ended up finishing Race 1 in P2. Good points but I wanted to win. Race 2 we made changes because I didn't think we had the winning setup. The setup changes we made were good, but I needed just a bit more. We ended up fourth but was happy with the pace. Later I was approached by a race steward and was asked to be present in a meeting where I was assessed a penalty and not permitted to compete in race three. Penalties sometimes happen in racing even when your actions aren't intentional. It's horribly disappointing, but the team and I just need to fight through the disappointment and not look back. I'll be ready for Barber, and I plan to be lightning-fast just like we were all weekend long at VIR."

Ronan Murphy: "VIR was a really positive turnaround from Mid-Ohio. I felt more on top of the car over the weekend and although qualifying was a little bit disappointing again, our race pace was very strong in all the races. It was awesome to be able to put that pace to good use, managing to put myself on the front row for race three and then going on to score a podium, which I think showed the potential of what is possible when everything comes together going forward from now."

Varun Choskey: "I had a mixed weekend with good pace but no results to show for it. I'm looking forward to coming back stronger in Birmingham and will look to add more podiums for the Kiwi Motorsport squad."

With a jam-packed schedule to start the season, Kiwi Motorsport will return to the track this weekend for a quadruple header at the famed Barber Motorsports Park. Sprawling over 880 acres, the Birmingham, Alabama facility is one of the premier racetracks in North America and will be the host to rounds six, seven and eight over the July 31st - August 2nd weekend.