One Win and Three Podiums for Dylan Tavella at VIR 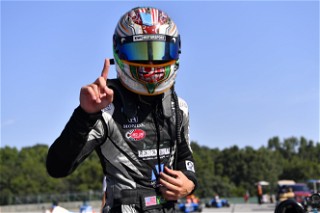 July 27, 2020 - After securing a second place podium result at the opening event weekend of the F4 United States Championship Powered by Honda, Dylan Tavella was elevated to a victory following post-race technical inspection revealed that the winner's car was utilizing several performance enhancing components. As the highest placing legal car in the overall running order, Tavella was eventually classified as the winner nearly two weeks after the event following an appeals hearing confirmed the legality of the on-track winner's car.

Returning to the Virginia International Raceway (VIR) for rounds three, four and five two weeks later and with the goal to improve in qualifying and give himself a better chance at maintaining strong race results, the Kiwi Motorsport driver would have three opportunities to top the podium in the first F4 triple header of the season.

Beginning the weekend with the fifth and third fastest laps in the official practice sessions, Tavella put his Kiwi Motorsport prepped #14 entry in the third position during the one and only qualifying session on Saturday morning. Holding station for the first official race of the weekend, Tavella advanced forward to the second position early on, but eventually was forced to settle for the third step on the podium in the end.

"To start the year off with a win and follow it up with a podium is exactly what we wanted to do," expressed Tavella. "With the first few races of the season now under our belt, we have two more this weekend to see what we can do and continue to build momentum for the rest of the 2020 season."

Back to the track on Sunday morning, Tavella returned to the top step of the podium. Starting from the pole position, the Kiwi Motorsport driver fell to second early out but was able to return to the point later in the race. Taking the top spot just before the caution flag flew with two minutes left in the race, Tavella drove behind the pace car and unchallenged to the win, his second of the season.

Despite his win in the previous race, Tavella was forced to start outside row two as the round five grid was set on round four lap times. Quickly moving his way forward to the second position, the New York resident stalked the race leader as he looked for a way by. After a couple of caution periods and restarts, Tavella was unable to mount a charge in the final few minutes as an on-course incident halted any more green flag racing action as competitors paraded around to the checkered flag. Finishing second and increasing his season total to four podiums including two race wins, Tavella has firmly planted himself in the championship points battle.

Tavella continued, "I was in the right place at the right time in this morning's race in regard to the yellow flag but in the wrong place this afternoon despite having the fastest lap of the race. This is the true definition of you win some and you lose some, but I think we have shown that we are here to compete, and we will not backdown. Thank you Kiwi Motorsport, Teena, Garry, Dave, Tony, and SR1 for the ultra-fast car and the chance to run at the front of the field. Also, a big thank you to my teammates as well as my partners Lebenthal Global Advisors and Mordfin Group."

Dylan Tavella, Kiwi Motorsport and the entire F4 United States Championship Powered by Honda program will be back in action this coming weekend at the picturesque Barber Motorsports Park in Birmingham, Alabama over the July 30th - August 2nd weekend.

For more information on Ride With Dylan, please visit www.RideWithDylan.com.