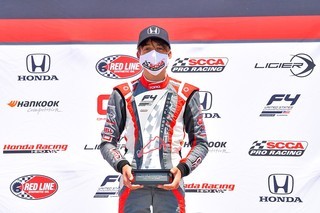 A star in the making solidifies himself as a championship contender

July 21, 2020 - A star is in the making after a triple podium and double race win weekend. Rookie driver Hunter Yeany claimed three podium positions, including a pair of victories, in the Formula 4 United States Championship Powered by Honda this past weekend at the always racy Virginia International Raceway (VIR). The 15-year-old took the overall points (provisional) lead in the chase for the series title and has scored either a race win or podium result in each and every F4 event of 2020.

With the Velocity Racing Development program, the Virginia-based driver showed great speed in practice and continued that through qualifying. Yeany fought hard to keep the P1 placement throughout the first wheel-to-wheel action of the weekend and came out on top in the end to score his first official points scoring win of 2020. As for race two, Yeany started sixth with the grid being set from the previous race lap time and drove his way straight to a third-place podium finish with an incredible standing start.

Eager to claim a second win in race three, Hunter Yeany started from the pole position, remained focused and with the help of his Velocity Racing Development team, added another victory to his growing resume as he climbed to the top step of the podium to close the weekend with a win.

"I was really hoping to get that win in the second race to make it a full sweep, but I really can't complain with three podiums," expressed Hunter Yeany, who is now at the head of the field with the overall series point lead. "Winning a few races is great but the overall goal is not yet done until we get to the end of the season. I am fully focused on the championship and can't wait to reach my goals."

As one of the youngest drivers on the grid, Yeany is just getting started. Look for more race wins and podium results from Hunter Yeany in the next F4 United States Championship Powered by Honda race weekend at Barber Motorsports Park July 31st through to August 2nd.

For more information on Hunter Yeany, please contact RTD Media & Management at Info@RaceTechDevelopment.com or follow him via his social media channels.