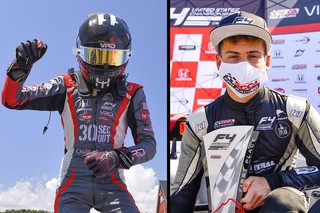 The Formula 4 United States Championship Powered by Honda winners from the opening rounds held at Mid-Ohio Sportscar Course June 27-28 were decided by the SCCA Pro Racing Court of Appeals and F4 U.S. Stewards over the weekend, promoting Hunter Yeany (Round 1) and Dylan Tavella (Round 2) to the top steps in their respective rounds.

Jay Howard Driver Development pilot Christian Bogle took the checkered flag in Round 1 and was listed as the provisional race winner. However, his car and his teammate Bijoy Garg, who finished second in the opening round, did not pass post-race technical inspection and their results were disqualified. The team was issued a fine and both drivers were given a three-race penalty to start from pit lane.

The decision was appealed by JHDD per the F4 U.S. Championship rulebook. The SCCA Pro Racing Court of Appeals, comprised of Timothy Mayer, Dennis Dean and Brian Hughes, heard the case, and after investigating all the given evidence and interviewing all parties involved, confirmed the original decision made by SCCA Pro Racing officials for the event.

The final judgement promoted Yeany to first, Nick Persing to second and Jose Blanco to third in the opening round.

“The whole Mid-Ohio weekend was exciting and interesting, said Yeany. “There was a lot happening behind the scenes, but I gave it my best and for my first championship race weekend I’m pretty pleased with the results.”

In Race 2, all JHDD cars were disqualified in post-race tech, after officials discovered non-compliant parts.

Round 2 results were revised to reflect Tavella as the winner with Yeany in second and Blanco in third.

“Super happy leading the championship going into Virginia,” said Tavella. “I’d like to thank the whole kiwi team for such an amazing car and hopefully we have the same result leaving Virginia.”

Per FIA rules, Round 1 at Mid-Ohio will not count toward the championship as not enough laps were completed, due to tempestuous weather, to count for points. The round will be made up at Barber Motorsports Park.

Decisions made by the Court of Appeals are final and the findings cannot be appealed a second time. The window has expired for an appeal to the Round 2 decisions