News Flash: Tavella Slides into First in Race 2 at VIR 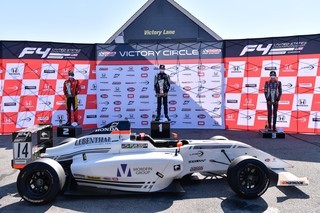 Tavella starting from pole was quickly challenged by Velocity Racing Development Driver Hunter Yeany. Yeany charged from a sixth-place spot to take the lead early in the 30-minute round. Being swarmed by a pack of cars pressuring Yeany for the point. Tavella slipped into Yeany's inside, going side-by-side entering Turn 1. With a fake out move by Tavella entering Turn 1, Yeany went wide through the turn, leaving just enough space for Tavella overtake for first. Yeany was unable to pay back the favor as the track switched to a full course yellow with less than four minutes remaining, ending the race under caution.

"It was a tough race from the beginning," said Tavella. "The car was perfect and I am happy to come away with the win."

Group-A Racing rookie Nicholas Rivers capitalized on the multiple restarts, charging from a 16th-place start to end the session in second. Yeany claimed third, while a pair of Crosslink/Kiwi Motorsport drivers Spike Kohlbecker and
Jose Blanco rounded out the top five.

F4 U.S. has one more round at 1:20 p.m. Eastern. To stream the the event live, visit FANRacing.live