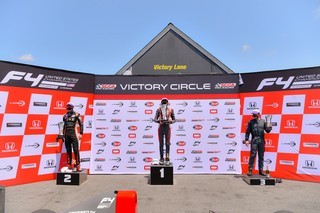 "The racing was great," said Yeany. "There were a few great battles at the beginning and I am feeling very confident about the race tomorrow."

A pair of rookies completed the podium with Crosslink/Kiwi Motorsport driver Spike Kohlbecker in second and DC Autosport pilot Josh Sarchet in third.

Nick Persing and Nicholas Rivers rounded out the top five.