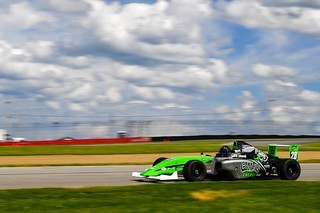 July 16, 2020 - With the first event concluding less than two weeks ago and the next event this coming weekend, Alliance Racing will once again bring six drivers to the F4 United States Championship Powered by Honda event at the Virginia International Raceway. Joining the program will be Annie Rhule as the young female will see action in a Ligier JS F4 in the Formula Race Promotions effort as five drivers compete in the third, fourth and fifth events in the F4 program.

"We had one driver change for this event weekend but are pleased to welcome Annie Rhule to the ADDA program," expressed Toney Edwards. "Annie had a successful test a few months ago, and as part of her transition from karts to cars, will take part in the FRP program but still be part of the Alliance Racing team as they compete side by side this weekend."

Returning to the second event of the F4 United States Championship Powered by Honda is Hayden Bowlsbey, David Burketh, Will Holtz, Ayrton Ori and Will Edwards. Absent from their driver lineup will be David Dalton Jr.

It will be an interesting weekend in VIR as a Promoters Test Day on Thursday and an extra race event on Sunday will provide double the amount of track time and a more jam-packed event. A mistake in one session could leave you on the sidelines for the next so the approach is to be cautiously aggressive.

Edwards added, "We will urge our drivers to race smart and clean. While the abundance of track time is great, it also could pose for some issues that we need to be prepared for. We have reset our goals as a team for VIR and will look to achieve them throughout the weekend."

With a Promoters Test Session on Thursday and Official Practice on Friday, Qualifying and the first wheel-to-wheel action of the weekend will take place Saturday. Sunday will be the home to two more races providing Alliance Racing competitors with three opportunities to earn their way to the podium.