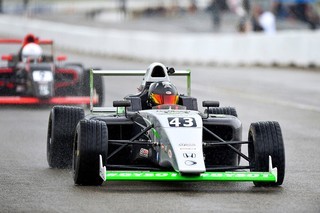 June 30, 2020 - With one of the larger Formula 4 United States Championship Powered by Honda series grids in the existence of the series, 33 competitors, including six from the Alliance Racing program, descended on the Mid-Ohio Sports Car Course for the first event weekend of the season. Taking place in the little hamlet of Lexington, Ohio, the Alliance Racing squad managed to gain a total of 61 positions in the two wheel-to-wheel races on the weekends with all results still yet to be made official.

"It was a strange weekend in Ohio," explained Toney Edwards. "We had some good pace in practice and a lot of potential heading into qualifying. While we always want to win, our goals in 2020 are a little different with a crop of rookies in the program. Consistently improving, gaining experience and working our way up the order is the task at hand, and I am proud that our drivers were able to do that this weekend."

Race one was run under wet conditions as rain began to fall as drivers proceeded through their warmup lap. With officials deeming the track unsafe for the slick Hankook tires, drivers headed to the pit lane to change to wet weather tires before the lights went green. Shortening the race to fifteen minutes in length, the key was going to be staying out of trouble in the opening complex of corners.

With a disappointing qualifying effort, each Alliance Racing driver improved during the opening lap and would need to as the first two corners would be the only green flag running time that they would get. David Dalton Jr. turned his 16th place qualifying effort into a top-ten finish coming home in ninth while David Burekth improved four positions to finish 15th. Ayrton Ori was the biggest mover of the six-driver team jumping from 28th to 16th while Will Holtz finished 17th after starting 20th. Will Edwards also avoided the opening lap melee jumping seven positions to finish in the 22nd position.

Race two of the weekend would be run Sunday afternoon under sunny skies. With a big change in weather in a 24-hour period, the six Alliance Racing drivers combined for a 28-place increase from starting to finishing positions. David Dalton Jr. once again garnered the best results for the team with a 13th place result while Bowlsby, Holtz and Ori all finished in the top-20 with 15th, 16th and 19th place results respectively. Will Edwards was plus five positions on the day to come home 24th while David Burketh ran into some trouble early in the race and ended his weekend in 26th.

Edwards added, "We closed the weekend with very little damage and each driver gained some more experience. We will now turn around and prep for the VIR event and reset our goals as we get ready for Virginia."

In post-race technical inspection there were several issues with drivers and team equipment that caused multiple penalties and disqualifications. An appeal by a competing team locked in the unofficial results until series officials and the FIA look at the severity of the actions and determine the potential consequences. While the finishing positions are where drivers finished on track, there is a strong chance that each driver will move forward in the results pending the series and FIA ongoing investigations.

The next on track action for Alliance Racing and the F4 United States Championship Powered by Honda is in less than three weeks' time at the VIRginia International Raceway over the July 17th-19th weekend.

For more information on Alliance Racing and opportunities for an in-season test program and the complete 2020 F4 United States Championship Powered by Honda, please contact Toney@Alliance.Racing