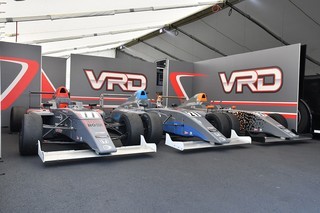 June 24, 2020 - With the revised 2020 season start about to kick off, Velocity Racing Development hasn't eased up on the gas pedal. This Georgia-based team is continuing momentum from their recent test at Mid-Ohio Sports Car Course and carrying it into the first race of the season.

Team Manager Dan Mitchell seemed very pleased with the overall performance stating, "It went really, really well; all the cars were quick, and all the drivers performed as expected."

Mitchell was particularly pleased with Mathias Soler-Obel's performance. Soler-Obel returns for his sophomore year in the FR Americas series powered by Honda with VRD in hopes to claim this year's championship title. Mitchell has high expectations for his FR Americas driver given Soler-Obel "tested well and performed super consistent throughout, having not been in a car in over six months."

As for comments on his F4 U.S. Championship drivers Mitchell says, "Erik Evans performed well in the wet weather conditions and Kyffin Simpson drove well all around." Unfortunately, there was a crash on day one of testing with F4 U.S. Championship driver Hunter Yeany, who had been running in an FR Americas car. Dan Mitchell states, "Hunter had a difficult session considering a mishap on day one with some confusion on a yellow flag," leaving Yeany without a car to drive on the second day of testing.

Velocity Racing Development, being the only co-owned British and American team in the FR Americas and F4 U.S. Championship series, claims their approach to the racing world is a rarity you won't be able to find with any other team in this league. They bring the best fusion between British Formula racing and American racing to the arena of F4 and FR. Their recent development of VRD Academy offers intense training for kart drivers who are looking to make the transition from karts to cars in the F4 U.S. Championship series. Many of their current drivers have graduated from this program, and they aim to pull their future F4 U.S. Championship and FR Americas drivers from it as well.

As the opening race at Mid-Ohio Sports Car Course is now upon us, VRD feels confident with their overall test at the track and is looking forward to being able to show that in a competitive environment. It's safe to say fans can expect an exciting season from Velocity Racing Development.

programs, please feel free to contact Daniel Mitchell via email to Dan@DanMitchellMotorsport.com or