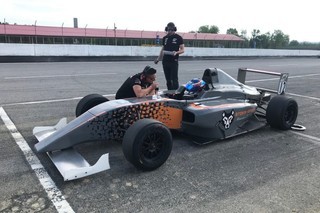 F4 U.S. Rookie keeping up with the veterans

June 18, 2020 - Erik Evans is set to turn some heads in his first appearance in the F4 United States Championship Powered by Honda season following his impressive performance in the YACademy Winter Series Presented by Hankook during the off-season. Evans, alongside his team Velocity Racing Development (VRD), scored four podium appearances, verifying his placement in the growing and competitive F4 program.

Velocity Racing Development recently attended a test at Mid-Ohio Sports Car Course where Team Manager Dan Mitchell seemed pleased with Evans' performance stating, "Erik was great in the car and performed really well in wet weather conditions. He is a talent behind the wheel, and I think he will surprise a lot of people in 2020."

Following the test, Evans was eager to share his excitement for the upcoming 2020 season. "All of the Velocity Racing Development team drivers have been fast in tests that included multiple other teams, and we've always been right up there at the front fighting with drivers who have been doing this for two or three years. Considering we have an all-rookie lineup; I would say that's pretty good."

Evans has also recently formed a partnership with STORM + SAVAGE Apparel, a lifestyle t-shirt company with clothing for men, women and children designed to unleash "The Beast Within." The STORM + SAVAGE #29 entry is set to debut at the Mid-Ohio Sports Car Course for its first race of the 2020 Season over the June 25th to 28th weekend.

Evans added, "I have set goals that I think are both challenging yet achievable. This will be my first national event and my first time competing against twenty or more cars, but I am excited and anxious to get going."

To view the  STORM + SAVAGE t-shirts and hats, or learn more about this growing apparel company, please visit them online at www.StormAndSavage.com and be sure to follow them on Facebook and Instagram by searching @StormAndSavage, or follow their hashtags, #stormandsavage, #iambeast, and #thebeastwithin.

For more information on Erik Evans, please contact RTD Media & Management at Info@RaceTechDevelopment.com or follow him via his social media channels by searching @ErikEvansRacing.