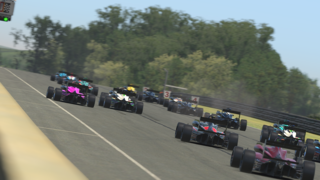 For the first time since the 2017 season opener, the Formula 4 United States Championship Powered by Honda will visit Homestead Miami Speedway on Tuesday

Hosted on the iRacing platform, the virtual race will be staged on the same 13-turn, 2.2-mile Roval course the drivers will face later this season in real life.

Traditionally before each race, drivers participated in a 30-minute open qualifying the Monday before each round. This week, the drivers received 30-minutes (or four laps whichever came first) of individual track time.

“During open practices we noticed that the large turnout and the short track length paired with the brief qualifying wouldn’t allow for some drivers to get a clean look at the track,” explained SCCA Pro Racing Communications Director Amy Greenway. “While we try to keep our sessions and car set up as close to real life racing as possible, sometimes our real life practices don’t always translate to our virtual championship. This week we decided to hold individual pre-qualifying sessions to allow all the drivers an equal chance to get in a good lap since there are only a limited amount of entries permitted into each race.

“The change allowed some new drivers to shine,” continued Greenway. “Typically, Round 2 winner Simon Sikes tops the standings, but we saw nine-drivers beat Simon’s fastest lap on Monday, so I think we are in for some exciting racing for Round 3.”

The driver with the most pole position starts at the end of the season will receive a free entry for a promoter test day from SCCA Pro Racing in 2020 with the driver’s team of choice. Respectively, Sikes, with two pole position starts, can clinch the award tonight if qualifies with the top time.

Live coverage by Apex Racing TV starts at 6:30 p.m. Eastern.”Podium” interviews with the top drivers will follow the race.