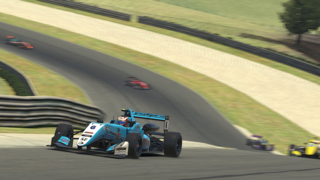 “I needed some redemption from the first round, it was nice to take it flag to flag,” said Sikes. “It was nice to start on pole, because the aerowash at here is a very big factor. I was able to hold the pace and run very conservative the first half of the race until I caught some lapped traffic.  After that it was just going to the checkered.”

Sikes edged out Formula Regional Americas driver Quinlan Lall by .144-seconds to start on pole, his second front-row start of the season.

Sikes got the jump off the line and pulled a sizeable gap through the first half of the race, but Round 1 podium finisher Viktor Andersson started to chip away at Sike’s lead with his proven fast pace. Despite setting several fast laps, Andersson made only marginal gains on Sikes before incidental contact with Ibrahim late in the race punted his Jay Howard Driver Development machine off course. Trying to recover while nursing a beat-up car, Andersson lost two positions and his chance at a podium finish.

Losing valuable time to Sikes following the clash with Andersson, Ibrahim, who won the opening esports round at Indianapolis Motor Speedway, recovered for a second-place finish.

“It was quite a tough race, I had damage to the car for most of the race,” said Ibrahim. “My pace dropped off pretty dramatically after that. Both end plates were gone and I had to overcome a lot of understeer. It was really tough out there.” 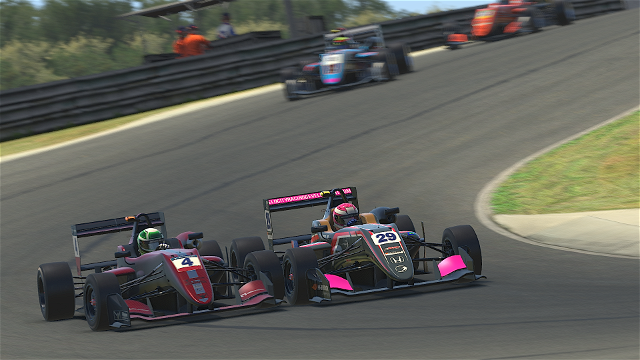 In the final moments of the 30-minute round, Kacic was all over the gearbox of Andersson. Weaving trying to keep Kacic behind him, Andersson defended his third-place position several times as the pair went side by slide through multiple turns. But Andersson’s exceptional race craft  wasn’t enough as Kacic, using the slipstream, whipped to Andersson’s outside. Overtaking the JHDD F4 rooking entering the Corkscrew, Kacic finished third, his first podium finish of the esports season. Andersson was forced to settle with a fourth-place finish with Jack Harrison (Jack Harrison Racing) finishing fifth.

“I was able to make up a lot at the end,” said Kacic. “It was a really good race. I started fifth, put in a few good laps, and took advantage of the damaged cars in front of me. I was able to cash it in there at the end.”

After two rounds, Ibrahim leads the championship by eight points over Sikes. Seven points separates second-place Sikes from third-place Andersson, heading into Round 3 of five

The KCR Simulators F4 U.S. Esports Invitational Championship returns to action on Tuesday, June 15 at Homestead-Miami Speedway at 6:30 p.m. with a set of new and returning competitors.

The event schedule will include one 10-minute practice, one 10-minute qualifying and one 30-minute race with points following the FIA F4 system.

Round 3- Fans can watch the action live on the F4 U.S. YoutTube channel and Facebook page: