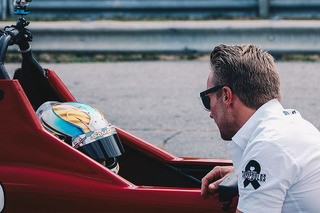 Jay Howard Driver Development (JHDD) is delighted to announce that Sam Paley will be driving for the team in the 2020 Formula 4 United States Championship Powered by Honda.

Paley, who resides in Villa Hills, KY, has a strong record in karting but possesses limited experience in open wheel racing. The 2020 season will mark Paley’s first full season in open wheel racing, where he will be reunited with Jay Howard who has been a consistent and positive influence on his career to-date.

“It feels great to be back where it all began with Jay Howard Driver Development,” said an excited Paley. “I have been working with Jay and his program on and off since I was 10 years old, and he has played a major role in accelerating my driving career to the level I am currently competing at. I’m so excited to finally have the chance to complete a full season in Formula 4 and a shot at the championship. Time to get to work!”

Team-owner Jay Howard has been keen to have Paley in an open wheel car for a number of years, and the opportunity to work with another young driver who has shown much promise in the karting ranks has the former INDYCAR driver excited about the upcoming season.

“I have known Sam and his family for a number of years now, and I have always believed he has what it takes to be quick given the right opportunity,” commented Howard.  “I’ve worked with him in karting, as well as having run him in select F4 U.S. Championship races, and I know he will be competitive given a full season with the JHDD team. He’s got a great attitude as well, so I am really looking forward to seeing how he and the whole teams gets on this season.”

With the start of the 2020 F4 US Championship season delayed due to the current pandemic, Paley and his JHDD teammates are preparing for action to get underway next month. The F4 U.S. Championship’s revised schedule will be announced shortly.