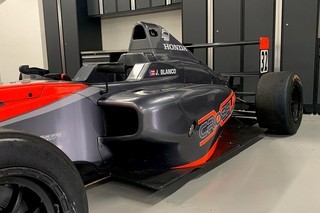 Blanco will look to continue success for Team Crosslink

With last year's champion leveling up to the Formula Regional Americas Championship Powered by Honda in 2020, Jose Blanco will fill the void left at Team Crosslink as he becomes an instant championship threat. Joining the Crosslink Competition program as they continue their partnership with Kiwi Motorsport, Blanco will compete in the complete Formula 4 United States Championship Powered by Honda as he looks to make it back-to-back titles for the Texas based outfit and continues his climb up the motorsports ladder.

"I am very much looking forward to working with Sean, Patrick and the entire Crosslink Competition team in 2020," explained Blanco. "I've known Patrick for two years now and have been watching him and his team closely. They have done a fantastic job over the last couple of seasons growing from a brand new operation into a competitive program, and it is just a pleasure to be able to be a part of it.  Also, the group of guys they have do a really good job and are all very good people, so it makes it even better to work with people you know and are of such high character."

"We started small and had a karting program that was fairly successful," explained Patrick Flynn. "We ventured into the F4 program and partnered with Kiwi Motorsport, and they have been nothing but a great partner and we look forward to continuing that alliance moving forward. Now this year, we will also run Joshua Car in FR, so we have completed our ladder from karts through F4 and into Formula Regional Americas all while winning along the way. The goal for this season is no different, and we think that Jose can challenge for the title."

Blanco continued, "My goal this season is to ultimately win the championship. I will aim to achieve this goal every day by working as hard as I can, and together with the team making the most out of every session, every race and every weekend."

As a race winning karting program that competes at all the elite national series across the country, Crosslink Competition has built their own internal ladder to progress karters into cars. As the reigning F4 United States Championship Powered by Honda championship winning team and confirming their participation in the FR Americas program in 2020, Crosslink has had a meteoric rise in creating their own driver advancement program.

With the first event of the 2020 campaign delayed until early June, Crosslink Competition has some extra time to prepare for the first green light of the season at the famed Circuit of the Americas over the June 5-7 weekend.

To follow Jose Blanco and his quest for the 2020 series title, please follow Crosslink Competition on social media by searching @TeamCrosslink. To follow Jose directly, he can be found at: