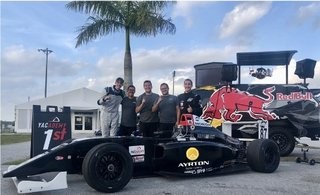 Hailing from Florida, Jeremy Fairbairn was one of the leaders in the karting ranks right up until his 2018 Superkarts! USA SuperNationals victory in Las Vegas, Nevada. It was then he began the long journey from karts to cars. Considering a move to sports cars straight from senior level karting, the decision to compete in Formula 4 was made as he followed his heart and dreams of open wheel racing.

Beginning testing in October of 2019, Jeremy showed great pace on every track he tested, enough so that the decision was made to join the Formula 4 United States Championship Powered by Honda in 2020 with Primus Racing, a leading team from his home state of Florida. Primus Racing boss, Jon Baytos, and his impressive young team of operators convinced Jeremy and his father from the very first test they would make a great home for the upstart open wheel driver to begin his career in formula racing alongside teammate and returning Primus driver, Aidan Yoder.

To help make it a reality, the 15-year-old driver has secured his first marketing partner, and not just any partner, but a company who, at their very core, have racing in their DNA. Ayrton Lighting was founded in Europe by a self-proclaimed racing junkie who named the company after the greatest driver ever to live. Since that time, Ayrton has risen to become a leading, global brand in digital entertainment lighting technology. Along with their industry leading N American Partner, ACT Lighting, Ayrton recently provided their latest products for the Super Bowl LIV halftime show. Ayrton's passion for power and performance perfectly matches Jeremy's aggressive and quick brand of racing, and he's quite excited to perform for his new friends at Ayrton and live up to that iconic name.

Ayrton jumped at the opportunity to partner with the speedy Floridian driver and has been excited throughout his successful pre-season test and race program. Linking together for the complete 2020 season, Ayrton Lighting will be the primary partner on the Primus Racing No. 87 Ligier JS car in the F4 United States Championship.

"We are extremely excited to support Jeremy, who is clearly an incredibly talented young driver," explained Ayrton CEO, Chris Ferrante. "The partnership is a natural fit, particularly given the passion Ayrton has for engineering, performance and the pursuit of perfection and Jeremy's insatiable desire to win!"

"I am very grateful to Primus Racing Team, Ayrton Lighting and my family for making this entire process possible," added Jeremy Fairbairn. "Getting behind the wheel of the car was never a nervous time for me, and I've been able to work well with the people around me, taking in their knowledge and experience. I am on a steep learning curve but loving every minute of it, and very much looking forward to joining the F4 US Championship beginning next month."

Competing in the Palm Beach rounds at the YACademy Winter Series Presented by Hankook, Jeremy Fairbiarn was the driver to beat, taking a sweep of all three wheel-to-wheel races at the Palm Beach International Raceway, including the inverted grid race.  In Homestead, the Primus car piloted by Fairbairn secured the pole position, however, Jeremy was only able to secure a Vice-Championship in the 6-race series due to a couple of untimely mechanical failures during the final three races. In the end, the test series helped to assure Jeremy and his team even more that he has the ability to advance his skills quickly and race up front when things get "real" in April.

With the first event of the F4 United States Championship Powered by Honda a month away, Ayrton Lighting / Primus Racing driver Jeremy Fairbairn is looking forward to the trip to Braselton, Georgia and his debut at Road Atlanta and in the nationally acclaimed program.