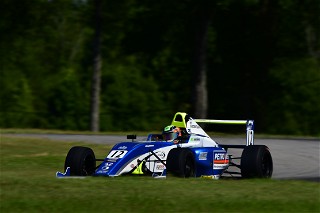 LAS VEGAS (Nov. 20, 2019)- As part of an emphasis on assisting in the development of the next generation of racers, Formula 4 United States Championship Powered by Honda team DEForce Racing will present the SuperKarts! USA SuperNational 23 X30 Senior and S1 class champions with a testing scholarship valued at $6,000.

“Karting is the foundation of becoming a good race car driver,” said DEForce Racing Team Principal Ernesto Martinez. “It’s a fact that SKUSA! has seen some of the most talented drivers go through their program. This motivates us to help out and give the kart drivers their first chance at an open wheel car. We might find our next champion.”

DEForce Racing is a multi-title team in F4 U.S., producing two drivers on the championship podium in its first two season of F4 competition. In 2019, DEForce drivers earned three wins with eight additional podiums and 19 top-10 finishes, leading the team to claim second in the team and driver championships.

For karters searching for the next stage in their motorsport careers, an F4 U.S. booth will be featured inside of SuperKarts! USA SuperNationals 23 in Las Vegas Nov. 19-24.

Karters and fans can visit the F4 booth daily starting Wednesday (Nov. 20) from 8 a.m.-4 p.m. PT. Throughout the five-day event, several F4 driver alumni will make appearances to answer any questions current karters have about the series from a drivers’ perspective. The drivers’ appearance schedule will be announced later on F4 U.S. social media and posted at the booth.

For a closer look at the Ligier JS F4 chassis, the Exclusive MotorWorks and Doran Motorsports F4 U.S. cars will be on display at SKUSA! SuperNats Nov. 20-24. While visiting, enter the F4 merchandise prize package give-away. The winner will be announced on Sunday (Nov. 24).