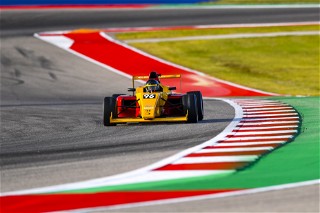 Group-A Racing spent the 2019 season running part-time programs for rookies to get their feet wet in the Formula 4 United States Championship Powered by Honda, creating opportunities for young, inexperienced drivers with limited funding. However, the team still managed to score points with the youngsters and lead laps at Road Atlanta.

While most teams take some time off following the final race, Group-A Racing immediately went to its winter home base of MSR Houston to launch off-season testing programs. The season ended on a Sunday and the team was already back on track testing Tuesday morning to get prepared for 2020 season.

Group-A Racing has fielded drivers from the United States, the Caribbean and Europe coming in for the first week of on-track action, which was a very successful start to off-season testing. Group-A Racing scheduled testing days with several more drivers before the new year, and immediately following.

Established driver and Group-A Racing team manager, Jonathan Scarallo, got back behind the wheel to assess new set-ups. Scarallo exited the car with a big grin on his face from the great work the team has done on the car’s performance.

“Our lead engineer is literally the best that money can buy and we are so fortunate to have him” commented Scarallo. “You name the classification of cars/series around the world, and he has competed in it and won in it. This past year we have been running a lot of new drivers, teaching them, and trying to stretch their budgets with basically no testing making his work a bit more difficult. With that, he has done a fantastic job using all the information from the manufacturers, formulas etc. to come up with phenomenal setups. I haven’t driven a car in 2 years, but it was so easy for me to instantly be setting fast lap times due to how well he has our cars setup, just another confirmation that we have everything that our drivers need to go win races and championships.”

With new drivers looking to join the team and current drivers returning, the team purchased a fourth Ligier JS F4 car to expand its operation accordingly. Group-A Racing will continue testing throughout the winter into early spring before doing the team’s usual ground-up rebuilds on the cars leading into the first race, ensure that everything is fresh and up to date for the drivers at the start of their championship campaign, leaving no stone unturned. All the cars get the same professional treatment no matter if it’s for drivers participating in their first ever race or the 100th race.