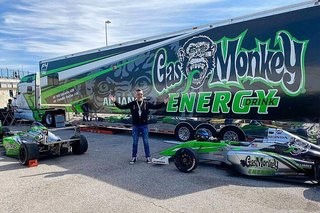 Exploding on to the Formula 4 United States Championship Powered by Honda scene in 2019 with a five-car strong program, Alliance Racing is set to continue their upward trend in 2020. With cars available for new drivers in the coming season and several of the 2019 competitors set to rejoin the Indianapolis based program, Alliance Racing is pleased to announce their renewed and continued partnership with the popular energy drink, Gas Monkey Energy.

"Gas Monkey Energy have provided great support and increased branding and promotion for Alliance Racing," explained Team Owner Toney Edwards. "The growing energy drink line and their staff have been a pleasure to work with and we are very happy to continue our promotion of the product onward and into our very busy 2020 season."

Flying the Gas Monkey Energy colors on five cars throughout 2019, Alliance Racing traveled to the Circuit of the Americas for the season finale to compete alongside the Formula One World Championship just a short ten days ago. While in Texas, team drivers were able to visit Gas Monkey Garage for photos and to see the behind the scenes of the popular TV show Fast N' Loud. Taking part in an autograph session while at The Garage, Alliance Racing was able to show Richard Rawlings and the Gas Monkey Energy staff their playground as the team was included trackside in the Alliance Racing VIP guest program.

"I'm not a pro-driver so seeing up close what these young people can do is rad," said Rawlings. "Gas Monkey Energy's continued support for Alliance Racing in 2020 goes beyond awareness for the brand, but to support the next-generation of race car drivers and I think we may have a few future superstars in our midst."

Edwards continued, "Our plan for 2020 is similar to this past season. We are looking to compete in the F4 United States Championship Powered by Honda with a minimum of five drivers and we will also look to take part in both the Formula Pro USA F4 Western Championship as well as the newly announce Yacademy F4 efforts in Florida. It will be a busy year, but this is just another way for us to have the Gas Monkey Energy logo seen around the country."

Taking no time off, Alliance Racing Sponsored by Gas Monkey Energy has already booked testing time for new and returning drivers this off season. If you are looking to be part of the F4 United States Championship Powered by Honda in 2020, this could be your opportunity. Contact Alliance Racing today.