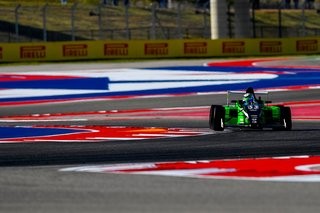 The last event of the 2019 Formula 4 United States Championship Powered by Honda for Alliance Racing Sponsored by Gas Monkey Energy ended this past weekend at the Circuit of the Americas (COTA). Brining four hungry competitors to race on the season's biggest stage, the Indianapolis based team ended their 2019 campaign with two top-five results and a lot of interest in their 2020 racing efforts.

"It was a decent weekend for us as a team and our guys worked very hard. We had several special guests from Gas Monkey Energy, including Richard Rawlings, and they had a blast trackside and, in the end, that's all we can ask for," explained Tony Edwards. "We will continue to push the Gas Monkey Energy branded cars to the front and are already looking forward to our 2020 program."

Chandler Horton led the team for the weekend on the results sheets as his fifth-place finish in race one was the highest place Alliance Racing achieved this weekend. Unfortunately race two did not go as planned for the Indianapolis based driver as some misfortune relegated him down the running order to P29. Newcomer to the F4 US program and Gas Monkey Energy teammate Tommy Foster showed his consistency claiming eighth and twelfth place finishes this past weekend at COTA. Having never seen the track until his one and only practice session on Friday, Foster proved his pace and will be a threat for whatever he decides to race in 2020.

Edwards added, "I would really like to thank the Foster family for trusting Alliance Racing and flying the Gas Monkey Energy colors at the Circuit of the Americas. We would welcome Tommy and his family back anytime."

With 38 drivers entered, Will Edwards showed his improvement from year-to-year. Struggling to have the pace in 2018 to even make the race, Edwards kept his nose clean and drove to 26th and 28th place results. Unfortunately, Dylan Tavella did not have the weekend he was expecting. Tavella rounded out race one with a 13th place result but a post-race penalty relegated him down the running order. Race two saw a blown head gasket come into play, and he was forced to retire after only completing three laps.

Edwards continued, "It certainly wasn't our best weekend, especially coming off of six top-ten finishes in Sebring, but I am happy with what we accomplished as a team for the 2019 season. Motorsports has the highest of highs and the lowest of lows, but we had more highs than lows this season and are looking forward to continuing our relationship with Gas Monkey Energy in 2020."

Taking no time off, Alliance Racing Sponsored by Gas Monkey Energy has already booked testing time for new and returning drivers this off season. If you are looking to be part of the F4 United States Championship Powered by Honda in 2020, this could be your opportunity. Contact Alliance Racing today.