D'ORLANDO LASSOES A PODIUM FINISH AFTER WICKED WEEKEND AT COTA 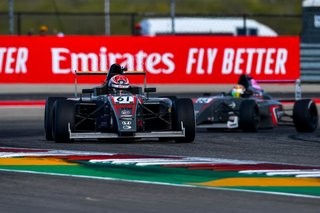 Racing is one of the those sports that sometimes the results are completely out of your control and the only thing you can do is bounce back the next day and try again. For Michael d'Orlando, his continued perseverance is what sets him above the rest and his efforts paid off.

The start of the Formula 4 United States Championship Powered by Honda season finale at the Circuit of the Americas kicked off with an impressive third place Qualifying effort on Friday for the 17-year-old rookie, in a record-breaking field of 36 drivers from around the world. This set the stage for an epic battle at the front of the grid for Saturday morning's race.

Saturday's race completely lived up to the expectations of an epic battle with d'Orlando showing consistently in the front three spots throughout the first nine laps, including two safety cars as a result of various on-track incidents. Then with only one lap to go, another safety car was deployed again making the final lap of the 10-lap showdown a sprint to the finish line. d'Orlando jumped to the lead position at the restart with unfortunate results in the following turn. Falling down the order after contact with a fellow competitor, due to no fault of his own, d'Orlando would ultimately be classified 30th, even after severe post-race penalties to fellow competitors were given.

The starting grid for Sunday's race is based on the fastest lap time of each driver from Saturday's race, therefore d'Orlando would start in the ninth spot for Sunday's main event. Poised for redemption after missing out on the result the day before, d'Orlando patiently and methodically moved his way up the order setting up once again for a show-down with the same competitor in the last lap for the final podium spot. In another shocking result, d'Orlando got hit again, in the rear wheel, in the final corner, which forced him to cross the line in 5th position and leading to disappointment of the missed podium photo opportunity. The post-race analysis by the series' officials took some time to sort out however ultimately d'Orlando was granted the well-deserved and earned 3rd place final race result.

"This weekend was absolutely amazing! The past three races that VRD [Velocity Racing Development] and I have competed have led up to this and our performance showed what we are capable of. These races were the best we'd had all year." explains d'Orlando. "I am disappointed for Saturday though, to not finish the race when I was in the lead and again to have contact in the last corner of the race on Sunday, to not cross the line in the third spot that I had. But I am very happy to come home with the official result in third place and I had a great experience at COTA the entire weekend. Racing along side F1 in front of the largest crowd I've ever raced for yet was an incredible experience. Thanks to everyone at the F4 US Championship series and to the guys at VRD for making this possible, and to my sponsors at DB Collaborative who also had a great weekend experience at COTA to be able to be there in person in support of me and my team."

d'Orlando's results on track were not the only part of his incredible experience. The week started at the Speed City's 2019 US ePrix Presented By SCCA Pro Racing where d'Orlando took the victory in the first round. And prior to the start of main event of the Formula 1 US Grand Prix, d'Orlando was a guest on SiriusXM Speed City Formula 1 US Grand Prix Pre-Race report and also check out his Speedcaster interview during the official autograph session of the F4 US Championship at COTA on Saturday afternoon.

d'Orlando Enterprises would like to extend a special Thanks to DB Collaborative for their support this weekend. Additionally, further appreciation to our partners at UFC Gym - Mamaroneck, Celtic General Contracting, Lane Office, LMEC Electric, Pierpont Mechanical , Iona Preparatory School, Motor Media USA, Skip Barber Racing School.and Focused Project Management. And also a special Thank You to Dan Mitchell and all the personnel at team VRD for this incredible opportunity.