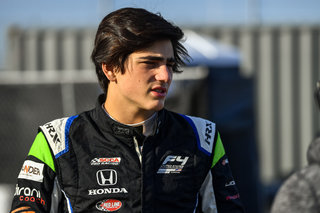 Racing alongside F1, the Brazilian finished fourth place in race 1 and was very close to the podium in race 2 but was forced to retire due to brake problems. The driver finishes the season in sixth place on the overall standings with 14 Top-10, two podiums, one pole position and second-best rookie

The 17th round of the Formula 4 United States Championship Powered by Honda last weekend (2 and 3) marked the end of the 2019 season with a record number of entries. Thirty-six drivers accelerated in the double round, which were part of the Formula One US Grand Prix package at the Circuit of the Americas in Austin, Texas.

Among the young talented drivers of the category, the Brazilian Guilherme Peixoto completed his first season in single-seaters and was very close to the podium. The DEForce Racing driver fought hard since his first free practice, battling between the fastest drivers.

On qualifying for race 1, Peixoto was disturbed by the traffic on his fastest lap and recorded the ninth fastest time. During the first race, the driver showed a lot of speed on the track and made good overtakes to reach fourth place in the race.

In the second race, the Brazilian started from seventh and had everything to fight for the podium. He soon reached third place, but with only two laps left, he was forced to retire due to brake problems.

With the results, the driver finished the season in sixth place and was the second-best rookie. For the 17 races Gui participated this year, he has finished in the Top-10 on 14 occasions. In addition, he went to the podium twice (two third places in Mid-Ohio) and also took one pole position.

“It was a season of learning and evolution. I didn't know any of the tracks and we grew up strongly throughout the season. Thanks a lot to the whole DEForce Racing team and to everyone who supported me this first year of single-seaters”, quoted the 16-year-old Brazilian. 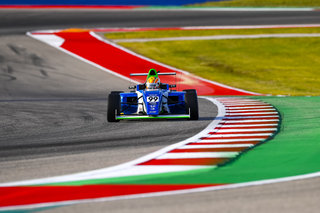 “In Austin we were always fast. From the first free practice we already realised that we would be able to fight for the first places. In qualifying we were also fast, but it was a short training time, lots of cars on the track at the same time and it made it hard to find a clean lap. I took some traffic and qualified ninth for race 1 starting grid”, he said.

“In the race, we managed to quickly make some positions and it was very good to get fourth”, he said. “In race 2 I started seventh and I think we had a good chance to fight for the win. But unfortunately, while I was third, I faced a brake problem and was forced to retire”.

Despite being out of the podium, the driver was satisfied and also happy with his chance to race on the same track, a few hours before Lewis Hamilton claimed his sixth Formula One title. “We showed speed every time we were on track. It was also really cool to race in the same event as Formula One. It was really interesting to meet some drivers and to be able to feel a little of the environment. I really enjoyed the Austin track and the whole circuit structure. It was a great place to end the season”.
For more information on Gui Peixoto or information on to become part of his motorsports program, please contact XYZ Talents Daniel Rodrigues via email to daniel.rodrigues@xyztalents.com or visit Gui Peixoto via his social media pages on Facebook, Twitter, and Instagram.