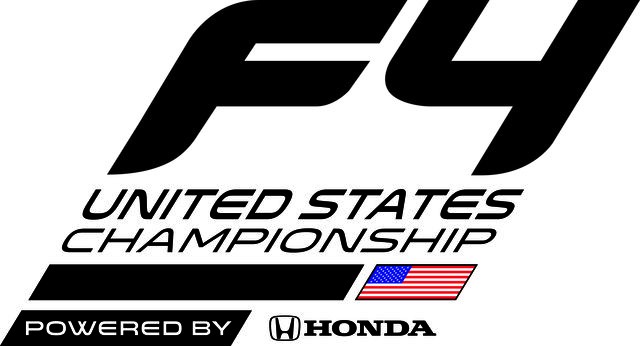 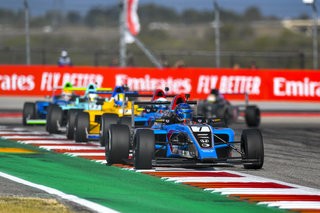 After securing his maiden victory in the Formula 4 United States Championship Powered by Honda opener at Circuit of The Americas on Saturday, Christian Bogle backed it up with another one on Sunday, sweeping the doubleheader United States Grand Prix weekend . The breakout performance catapulted Bogle in the season-long points standings, going from 24th position to finish his sophomore F4 season 10th overall in the championship.

Christian Brooks, in second, made it a back-to-back one-two finish for the Jay Howard Driver Development team.

During a history-making weekend for F4 U.S. with a record-breaking field, Michael d’Orlando secured his first top-three finish in F4, competing in front of a sellout crowd.

“I am really, really happy with this weekend,” said Bogle. “I ended the weekend with two victories, and the first two podiums of my racing career. With the progression I’ve made with just one year of racing is just really incredible. This race last year I was at the back of the grid and almost 10 seconds off pace. Coming into this weekend I had no idea that I was going to be able to pull of what I did. I am very proud of what we accomplished this weekend and this racing season”. 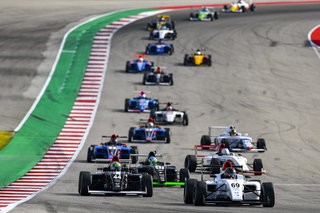 With the grid for Round 17 based on fastest lap times from the previous race, the 25-minute round started with F4 champion elect Joshua Car on pole position with his Crosslink/Kiwi Motorsport teammate Jose Blanco starting on the outside of Row 1. JHDD drivers locked up the second row­­ with Bogle in third and series newcomer Nolan Siegel starting in fourth. Row 3 was made up of Chandler Horton and Bogle.

Charging off the line from the Formula One-style standing start, Bogle carried his momentum from his Race 1 win, taking an early lead over Car and Blanco. Bogle lead the majority of the race until a one-lap full course caution regrouped the field with four laps left in the finale.

The three-lap shootout to the finish line was arguably the most action-packed, entertaining and costly laps of the weekend as some drivers attempted to secure championships and others USGP podium glory.

On the restart, Car, Brooks Blanco, Siegel, French F4 top contender Nicky Hays and d’Orlando barreled into Turn 1, challenging the No. 7 JHDD front runner and each other for position. In close quarters, there was significant overlap between the front of the field exiting Turn 1. On the outside of Hays, Siegel went wide, exceeding track limits and lost position.

In podium position, Blanco spun on his own merit entering Turn 12. The Puerto Rican pilot recovered but was out of top-three contention.

Resembling the Race 1 battle that left both Car and d’Orlando on the sidelines on the last lap, the two went toe-to-toe one final time. Driving each other hard around the 3.426-mile circuit, Car approached Turn 19 from mid-track with d’Orlando to his right. Car lost grip entering the penultimate turn, skidding to the right locking up with d’Orlando. The contact sent d’Orlando off course, costing the Velocity Racing Development driver valuable time.

Trailing Brooks, Car closed in to challenge for second on the entrance of Turn 9. Brooks sent it wide, losing the advantage to Car. The pair continued the battle into Turn 10 until wheels touched, sending Car over the apex curbing and into the air. The No. 9 Crosslink/Kiwi Motorsport car landed hard on all four Hankook Tires, losing two positions in the process as d’Orlando slipped into third.

On the second to last lap, Brooks, with the Vice Championship on the line, wasn’t giving up on the pursuit for first. Glued to Bogle’s gearbox racing down the back straight, Brooks used Bogle’s draft to whip to the inside line to take the lead. Brooks crossed the stripe just over three tenths of a seconds over Bogle. Following a post-race penalty issued to Brooks, Bogle was promoted to first.

“Joshua and I have raced against each other since our karting days,” Brooks said. “He makes me a better driver and today got a bit heated.  We were starting sixth and was able to make it up to first. Yesterday, we went from P20 to second. Despite everything, we had a great weekend with JHDD taking one-two in both races. A huge congratulations to my teammate Christian on another win. It was a great season and couldn’t really ask for more. A huge shout out to the team and to everyone who makes it possible for me to race.”

After cutting through the field from a ninth-place start, d’Orlando finished the race in fifth, but was promoted to third after Car and Siegel were served penalties post-race.

“This weekend has been absolutely amazing,” said d’Orlando. “The past three races that VRD and I have competed in have led up to this and it did not disappoint. Saturday’s race was the best I’ve had all year with the exception for Saturday when I was in the lead, which I sadly could not finish. Starting Sunday in ninth, I made my way through the field into third place. Ultimately, there’s some contact in the last corner but the post-race review from the stewards gave me the position I believe I earned. Thanks to everyone at F4 and all the guys at VRD for making this possible.”

In a close battle to determine second and third in the championship, Porto benefited the most from the penalties issued to the front of the grid. Moving from a seventh-place finish to fifth was just enough points to secure the 2019 Vice Championship, finishing the season 11 points ahead of Brooks. 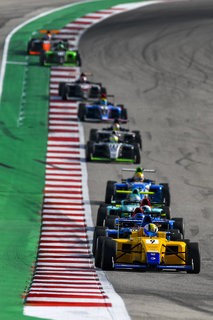 “That touch in Race 1 almost put our year to waste, but in Race 2 I managed to recover and score those points that gave me the runner-up,” said Porto. “Since it was no longer possible to reach Joshua, my team and I wanted this position in the standings very badly. Thank God, my family for their support, I all cheer for me and my team, DEForce Racing, for their work all year long. May 2020 be even better.”

While the action in the front of field had fans on their feet, the silent winner of the race was Wyatt Brichacek. After suffering mechanical issues on the reconnaissance lap in Race 1, Brichacek didn’t clock a lap time, forcing the Jay Howard Driver Development driver to start from the back of the large field. Starting nearly last in 34th, Brichacek advanced 28 positions in 10 laps to claim the Sabelt Hard Charger Award.

“The weekend started out good with a P4 in qualifying and I was in a good position to win,” said Brichacek. “Unfortunately, my race was cut very short after mechanical issues on the pace lap for Race 1. I started Race 2 in 34th and made my way up to 8th in just 8 laps. The weekend was definitely not how I wanted to end the season considering I had the pace to win. A big thanks to the JHDD boys for getting the car back together for the second race. Now it’s time to focus on the 2020 season.”

When the dust settled the top-10 finishers in the Round 17 finale were: Bogle, Brooks, d’Orlando, Hays, Porto, Brichacek, Ryan MacDermid, Reese Gold, Car and Siegel.

The 2020 F4 U.S. schedule will be announced in the upcoming weeks. For more information and full standings, visit www.F4USChampionship.com.