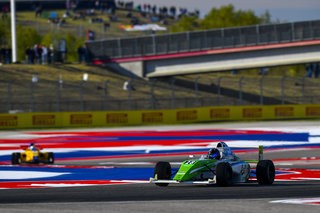 The Alliance Racing Sponsored by Gas Monkey Energy driver Dylan Tavella ended his F4 United States Championship season at Circuit of the Americas (COTA) this past weekend. Taking on the 20-turn circuit in Austin, Texas and running alongside the Formula One World Championship, Tavella qualified in the 14th position with hopes of ending his season on a high note.

After a podium finish in Sebring just under two months ago, Tavella was ready to take on his last event weekend of the season in Texas. Race one left Tavella with a decent start to the weekend, finishing 13th, but a post-race time penalty for an incident on track relegated him down to the 32nd position. Showing he had the pace to run near the pointy end of the field and with race one times setting the grid for race two, the New York resident started the second wheel-to-wheel action of the weekend from P11.

"It wasn't how I wanted to end my season, as I think we had a strong car that could compete for a top-ten," explained Tavella. "We had a clutch issue on Saturday that hindered the performance of my Alliance Racing #14 and then on Sunday, an engine issue took me out of the race. Definitely a disappointment on the season's biggest stage. I can't thank my team enough for all the hard work they put in this season, and I am ready to reevaluate and see what the 2020 season holds."

Despite a difficult weekend at the Circuit of the Americas, Dylan Tavella finished seventh in the overall F4 United States Championship Powered by Honda.

Tavella added, "I can't thank the series enough for providing a stage for us to compete on, but also for noticing my improvement from year-to-year and throughout the season. I am hungry for more and want to win a championship."