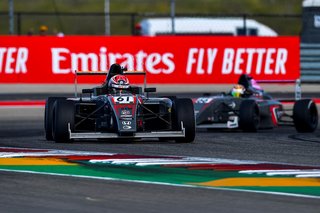 The start of the Formula 4 United States Championship Powered by Honda season finale did not get off on the right foot for Velocity Racing Development drivers. Classified well down the order due to no fault of their own, the duo returned to the 20-turn Austin, Texas, facility on Sunday and powered their way to top-10 results, including a podium finish for Michael d'Orlando on the season's biggest stage.

Taking on the Circuit of the Americas (COTA) with unfortunate results in race one, d'Orlando was involved in a last lap incident and classified in the 30th position while Ryan MacDermid followed right behind him in 31st. The VRD drivers quickly turned that around for race two when both competitors finished in the top-ten, with d'Orlando achieving the third and final spot on the podium.

"At first, we didn't think this weekend would go our way after what happened in race one," explained Dan Mitchell. "I am extremely proud to have both of our drivers in the top-ten during Sunday's second event and even more proud of the team for working hard and providing them the necessary tools to help them achieve their goals. It has been a while since we have had an F4 car on the podium, but I think we are the only team in 2019 to have cars in the top-three in both the F3 and F4 throughout the season."

d'Orlando started off the weekend qualifying third for race one. Showing great speed and a with a car that was capable of winning, Michael was crashed out when running up front during the final circuit in Saturday's wheel-to-wheel action. Frustrated and committed to achieving the goal for both himself and the team in race two, d'Orlando built the momentum in front of a packed house for Formula One fans and drove his way to a third place podium result to end the F4 season on a high note.

Canadian Ryan MacDermid had similar luck to his teammate. After qualifying in the 17th position, the formula car rookie went on to run into trouble in race one and was classified in the 31st position. Showing top-10 pace, MacDermid's lap times lined him up eighth to start race two as he looked to battle his way further forward. Running as high as fifth on occasion, MacDermid ended his weekend with a strong seventh place result and will look to springboard that momentum into a 2020 campaign.

With the 2019 F4 United States Championship Powered by Honda season now complete, VRD will return to their Atlanta Motorsports Park facility and begin winter testing and preparation for their 2020 campaign. With two drivers already confirmed for F4 in 2020, the team has limited seats available in both F4 and the F3 Americas Powered by Honda Championships.

programs, please feel free to contact Daniel Mitchell via email to Dan@DanMitchellMotorsport.com or