Crosslink/Kiwi Motorsport Locks Up Team Championship Ahead of COTA 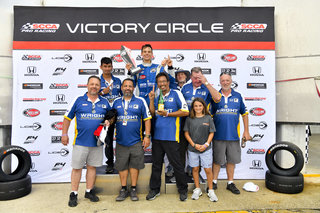 Crosslink/Kiwi Motorsport added to its impressive resume this year, clinching both the Formula 4 United States Championship Powered by Honda Team and Driver titles before the season finale at Circuit of the Americas with the Formula One United States Grand Prix Nov. 1-3.

“We have a great team of talented drivers, engineers, crew and chefs to feed us,” said team co-owner Teena Larsen. “We are a family working together and it’s that whole combination that whole puts us on top. We are thrilled to win the team championship two years in a row.  We have a lot of hard work ahead, and look forward to another winning 2020 season.“

In a strategic partnership packed with experience and ambition, Kiwi Motorsport and Crosslink Racing merged to become one in an effort to defeat all-comers in 2018. Since its inception, Crosslink/Kiwi Motorsport has not only won the team championship in 2018 and 2019, but it also set some unprecedented records.

Another huge accomplishment for the Dallas-based team this season is that its three full time drivers, Joshua Car, Jose Blanco and Arthur Leist, are all in the top-five of the season-long points standings, with Car earning the 2019 driver championship scholarship valued at $230,000 to continue his open-wheel career into the F3 Americas Championship. 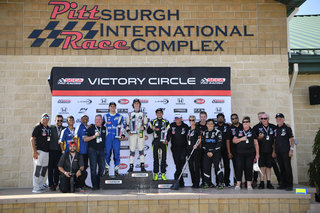 “Having our drivers return for 2019 along with new talent, we knew we had a good chance of performing very well this year,” co-team principal Garry Orton said. “All of our drivers: Josh (Car), Jose (Blanco), Arthur (Leist), Dante (Yu) and Liam (Snyder) drove exceptionally well, always scoring points toward the team’s title.  They all exceeded our expectations and did a fantastic job. It’s this consistency that put us on top and winning the teams championship back to back is fantastic. “

With its paddock commonly referred to as the United Nations of F4 U.S., drivers from six different countries exemplified the Crosslink/Kiwi Motorsport colors since last season. As the Dallas-based crew heads into the final stop on the 2019 schedule, one thing is certain, Crosslink/Kiwi Motorsport won’t be holding anything back, aiming to produce top results until the final checkered flies.

“Anyone in the top-13 this year had a chance of winning races which made it a very competitive championship,” said team co-owner Patrick Flynn. “We are very privileged and honored with how our guys performed this year under fierce competition. We expect in 2020 the competition to be even stronger and we really look forward to a successful year.”