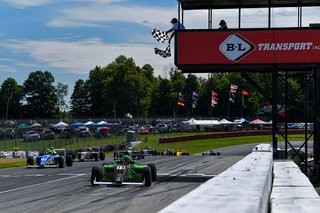 Sitting seventh in the Formula 4 United States Championship Powered by Honda championship heading into the Mid-Ohio event weekend,Dylan Tavella was hoping to garner significant points and move up the series standings. Instead, by the time round twelve, or race three on the weekend came, the New Yorker was just hoping to salvage as many points as possible.

"It was definitely a tough weekend for not only myself, but the team as a whole," explained Tavella. "We really struggled and it hurt me in my championship positioning. I was hoping to come here and be on the podium again as well as finish in the points in all three races, but it was not meant to be."

Showing decent pace in qualifying, Tavella was able to claim the eighth quickest time of the session and line up outside row four for the start of round ten. Maintaining his position ensured championship points, but lack of speed caused by an imbalanced tire and a bent wheel forced Dylan to fall victim to his competitors as he ended race one in P11.

"Our speed was gone and it showed on the time sheets," added Tavella. "Our speed was only good enough for the 15th quickest lap time and that is just not good enough. Now for race two, I will be forced to start in the middle of the pack where the trouble happens."

Starting 15th, Tavella was caught up in the trouble that he mentioned but not until later in the race. An incident damaged his #14 RideWithDylan.com entry as he was forced to retire with front wing and suspension damage, and was eventually classified in the 18th position.

Tavella continued, "On a positive note, before the crash I was able to turn a good lap and tomorrow we will start round twelve inside the top-ten.

Returning to the track on Saturday, Tavella was determined to move forward. Scoring points during every event this season, race three would be the last opportunity this weekend and Dylan did not disappoint. Taking advantage of speed, some on track battles, some overanxious drivers and some attrition, Tavella marched his way forward to narrowly miss the third and final step of the podium as he finished fourth and added ten points towards the season championship.

With just over a month off, the next F4 United States Championship Powered by Honda event will take place September 13-15 at the Sebring International Raceway in Sebring, Florida.

Dylan Tavella would like to thank his current marketing partners and team for their continued support. A huge thanks to Alliance Racing, Gas Monkey Energy, Bell Helmets and K1 Racegear. Additionally, Tavella sends an extra special thank you to all the donors that have participated in the Ride With Dylan program as he looks forward to continuing this in 2019 with all proceeds going to the Leukemia and Lymphoma Society.