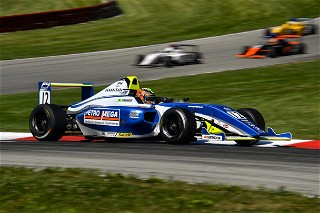 Another triple-round of Formula 4 United States Championship Powered by Honda played out this weekend at Mid-Ohio Sports Car Course. In the competition, the Brazilian driver Kiko Porto (Petromega / Miami Home Design / BF / DEForce Racing / Speed Group) secured another victory by winning the opening race of the stage on Friday (08/08), adding 25 points to his championship table. In the final two races, Porto added another 12 points, continuing as runner-up in the championship behind Joshua Car.

In qualifying, Porto secured the front row, behind only his teammate, Guilherme Peixoto. In the start of Race 1 the two remained in position, but over the course of 21 laps Peixoto lost performance, giving an opportunity for Porto to overtake and hold the tip to the finish line. It was the third victory of the season for the No. 12 driver.

In Race 2, Porto started in fifth position, eventually gaining a position in the first lap, but a tap from another competitor made him fall to last place. In a recovery race, Porto passed cars one by one, but full course cautions only allowed his charge to ninth place. 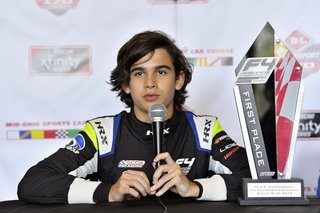 On Saturday (10/08), Porto once again started in fifth and finished fifth, earning 10 points, continuing in the fight for the 2019 F4 title.

“I have to celebrate very much the victory of Friday, I lost income in the final rounds, but managed to hold the first place. Too bad that later, the other two races were very complicated, otherwise it would have come later. But I'm happy for my work and my team, DEForce, let's go to the next one”, commented Kiko Porto.

The next stop of the season will be in Florida, September 13-15. This time on the Sebring International Raceway, a circuit with 17 turns and 3.74 miles on each lap.