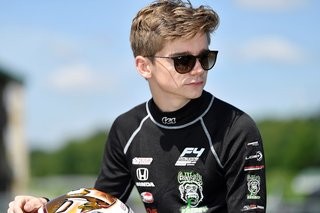 Second weekend and more goals achieved for the young Canadian

With only one weekend under his belt in the F4 United States Championship Powered by Honda program, Canadian Ryan MacDermid entered this weekend with a new set of goals. Walking away with two point scoring results and his best finishes of the year, the up and coming Canadian is proving his prowess in his rookie season of Formula 4 racing.

Battling the flu during the two official test days on Tuesday and Wednesday this past week, MacDermid entered the weekend with less track time than his fellow competitors as he was forced to spend one of the two days in bed at the hotel.

"I was really concerned as I was feeling terrible but wanted to drive," explained MacDermid. "In the end, it was better that I tried to get well for the weekend. I think that ultimately effected my practice session results on Friday, but we were able to turn it around once racing started."

After placing 12th and 15th in the two official practice sessions, MacDermid achieved one of his goals in qualifying. Turning the tenth fastest lap time, the Alliance Racing Sponsored by Gas Monkey Energy driver lined up inside row four for the first race on Saturday afternoon. Looking to move forward, MacDermid was a victim of some other drivers' errors and over anxious driving, losing some on track ground but recovered to finish in the 11th position.

Returning to the track Sunday morning and ready to attack, attack is exactly what MacDermid did. Committed to scoring more points, the 17-year-old garnered his best result of the season with a sixth place finish. 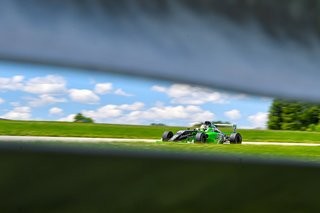 "What a great race," exclaimed MacDermid. "This is a true testament to the team and how they approach the events. Focusing on all drivers and the result of the team as a whole, we are all finding our way further towards the front of the grid."

The third and final wheel-to-wheel action of the weekend took place on Sunday afternoon and after an early race caution slowed the field, it was clean and green to the end. Matching his result from the race earlier in the day, MacDermid added his second sixth place finish of the weekend. Following post race penalties, the young Canadian leveled up to the fifth position, and increased his championship point tally after claiming his best result of the 2019 F4 United States Championship Powered by Honda.

MacDermid continued, "I wish we could race again tomorrow. I feel with each passing day, each passing lap and every event, I gain more confidence, speed and race craft."

With a month off from F4 United States Championship Powered by Honda competition, MacDermid will look forward to the July 26-28 event at the Virginia International Raceway.

November 1-3 - Circuit of the Americas

For information on Ryan MacDermid, please visit him online via his social media channels by searching Ryan MacDermid Motorsports.