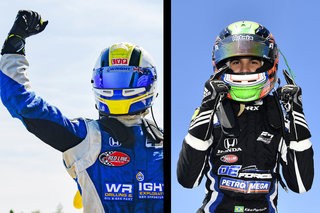 With spec Ligier chassis, Honda motors and Hankook tires, any driver can win in the Formula 4 United States Championship Powered by Honda, and in the latest three-round event drivers proved that theory as the top step was visited by three different winners at Pittsburgh International Race Complex June 21-23.

“What’s great about F4 is that any driver can win in any race, on any track, no matter where they start,” said rookie Christian Brooks. “I’ve raced most of these drivers in karting and we’re moving up the ladder together. We’ve built this rapport of mutual respect that equates to clean racing. Everyone races hard, everyone races clean and at the end of the day that makes the races great and everyone happy.”

In Round 5, Kiko Porto Recife, Brazil, claimed his second win of the season, with Christian Brooks of Santa Clarita, California, visiting the podium for the first time in second and Joshua Car of Sydney, Australia, kept his podium streak alive taking third.

In the weekend finale, Car rallied to finish the weekend the same way he did in Atlanta with a victory, followed by Brooks in second and Dylan Tavella of Massapequa, New York, rounded out the podium in third.

“We’ve had so much pace all weekend, but a few things just didn’t go our way,” said Car. “It’s awesome to get a win in the final round just like Atlanta. It’s just full adrenaline right now with the crew, so amazing.”

Fresh off his first career win in the first race of the weekend, rising Brazilian star No. 18 Crosslink/Kiwi Motorsport driver Arthur Leist started on pole for Round 5 on Sunday. Leist lead the field for the second race of the weekend at Pittsburg International Race Complex, but his good fortune from the day before was short lived as the Brazilian threw a wheel off onto the grass in Turn 5. Leist eventually rejoined the field in Turn 6 in fifth.

Puerto Rican Jose Blanco in the Tiffany Blue No. 32 Art-Draft Authority machine took the lead for a few turns, but suffered a similar fate to his Crosslink/Kiwi teammate. Blanco shunted off in Turn 14, gifting the lead to Brazilian Porto with Brooks in the No. 4 Hot Wheels Jay Howard Driver Development car in close pursuit. 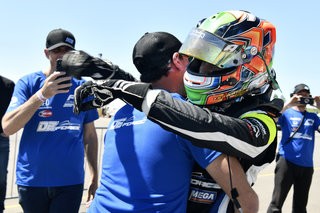 Once in the lead Porto, driving the No. 12 Petromega DEForce Racing car, held a half a second gap from second-place Brooks all the way to the finish line, claiming his second win of the season. Australian Car completed the podium in third, his fifth podium finish of the season.

“We made some wheel and wing changes to the car from Saturday’s race, and now the car is perfect,” said Porto. “I am glad we were there to pick up the pieces once the lap leaders spun out. I am very happy with the results.”

In the third and final race of the weekend, the F4 U.S. field was lead by the fastest driver in Race 2, Dylan Tavella in the No. 14 Gas Monkey Energy Alliance Racing car. Behind him the hard-charging Brooks, Car and Blanco.

By Lap 7, Car went on level terms with Tavella, passing him for the lead. Dicing with Brooks, Tavella fell to third as Brooks took the inside line entering Turn 17 for the pass. Crossing the front straight, Tavella’s nose was nearly touching Brook’s attenuator, causing Brooks to lose speed trying to defend Tavella from retaking second. 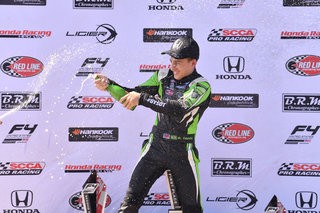 Finally shaking Tavella, Brooks tried to reel in Car’s bright yellow No. 9 Wright Drilling & Exploration Oil car, but Car held on for his second win of the season to take over the championship lead.

“The car was just incredibly fast today, we were just shy of the track record,” said Tavella. “My tires started to fade, and the rear got away from me a bit which allowed Christian caught me in the straight. It was a great day and I am happy to represent Alliance and Gas Monkey Energy on the podium.”

Blanco recovered from his incident earlier in the day to take fourth with Porto completing the top-five. Rookies MacDermid and Taurino continued to build confidence behind the wheel, placing sixth and seventh, while Wilson, Bethune and Peixoto rounded out the top-10. 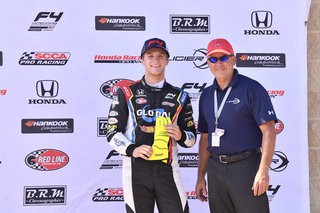 Brooks was awarded the Sabelt Hard Charger award for completing 17 progressive passes for the weekend.