DC Autosport with Cape Motorsports enjoyed much success in 2018, winning the Formula 4 United States Championship Powered by Honda title with Dakota Dickerson. Don Conner’s team got off to another strong start to the new season, winning the opening round of the 2019 campaign at Road Atlanta on the April 18-20 weekend with sophomore driver Teddy Wilson.  The 17-year-old British driver finished seventh in the series last year as a rookie and is now most definitely in the hunt for the title in 2019, having performed extremely well through the weekend’s difficult weather conditions.  Wilson backed up his Race 1 victory with finishes of sixth and seventh in the two additional races of the tripleheader, leaving the Georgia track sitting third overall in the championship standings. DC Autosport’s rookie driver Ryan McIlwee logged crucial experience in the tough conditions, scoring a high finish of 11th in the opening race, although he did run among the top-10 in the final race of the weekend. A couple of minor miscues, which were certainly learning experiences, robbed him of much better finishes.

"It was fantastic to win the first race, and Teddy did a stellar job under pressure once he got up front," said Conner. "It was great to see Ryan qualify P6 for the third race and with a solid start he was running fifth with no challenge early in the race. He showed great promise to start the new season. The guys did a great job and put in some long hours this weekend. We’re all looking forward to the next event."

Weather played a major role in the weekend’s storyline, as torrential rains overnight caused the cancellation of Friday qualifying. The series officials set the grid for Race 1 using times from practice, and this put Wilson in fifth and McIlwee in 14th. Wilson started from the inside of the third row for the opening race of the tripleheader, running the spec Hankook rain tires for the first time. The young sophomore driver moved quickly to the front on the opening lap, attacking with aggression. A red flag was thrown early when another driver went off-course, and knowing that the track was drying rapidly, Wilson attacked the leader on the restart to take control of the point.  He was pressured non-stop for the remainder of the race, and eventually won by just over a half-second, his first F4 triumph.  McIlwee started his first F4 race from 14th and ran a clean session to finish just outside the top-10 in 11th.

After Friday’s horrible weather, the track has dried slight for Saturday morning’s Race 2. Wilson started ninth based off his pace in the opening race, and he advanced quickly to the tail end of the front-running pack. The chaotic nature of the action up front made it difficult for Wilson to overtake and challenge of the lead, so he wisely avoided any low-risk attempts to finish sixth in the final tally. He was also not able to open things up to turn a fast lap, as the pack hindered his outright speed which dropped him to 14th on the grid for the third race. McIlwee made a small error midway through Race 2 and made contact with the wall, ending his run. However, Ryan was extremely quick and turned the sixth fastest lap of the race to lock in a third row starting spot for Race 3. 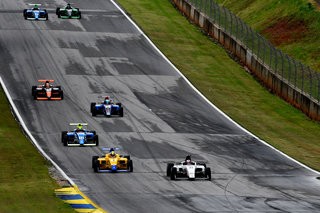 The final race of the weekend, McIlwee leveraged his starting spot to run fifth for many laps, but another small error sent him off-track and to the tail of the field. The 15-year-old from Escondido, CA put his head down and battled back to a 17th place finish.  Wilson started 14th but was the man on the move, turning the fourth fastest lap of the race.  Teddy knifed his way up to eighth ahead of a full course caution late in the race, and then used the restart to move to seventh in the final classification.  His trio of top-10 results now have him placed third in the championship battle.

At this time, the results from Race 2 and Race 3 remain provisional, as there were issues on track with drivers passing under yellow flag conditions.  Depending on the rulings, both DC Autosport drivers could potentially gain additional positions.

The next event on the 2019 F4 United States Championship Powered by Honda will take DC Autosport and its drivers to Pittsburgh International Race Complex in Wampum, PA on June 21-23.

Driver Quote: “Overall, being out of the car for 6 months with no prior testing to the event was very tough, but we worked really well as a team and to come out with a win was fantastic. Unfortunately, our true pace was not reflected in Race 2 and 3 with so many safety car periods, however, that’s how racing goes sometimes so as a team we can definitely take a lot of positives from the weekend, including being third in the championship points. I’d like to say a massive thank you to everyone at DC Autosport with Cape Motorsport for an exceptional job all weekend and my sponsors CS Ellis Group, Versatile Venues, Safe Products, Scholl Concepts and Scholl Concepts UK. Without these guys, I wouldn’t have even found myself on the grid.”

Driver Quote: “Although the results from Road Atlanta weren’t great, we know we have the pace to easily be in the top-10. The DC team worked very well with me and gave me a solid car every time I went out on-track. I am very confident for Pittsburgh and I know that we have every component to be on that top step. Once again, I’m very pleased with my team and can’t wait to be on track again.”