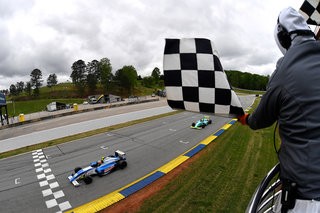 Road Atlanta hosted a practically perfect weekend for Brazilian driver Kiko Porto (Petromega / BF / DEForce Racing / Speed Group). In the triple round that opened the 2019 Formula 4 United States Championship Powered by Honda, season the racedriver gave a show for the fans attending the Michelin Raceway Road Atlanta in Braselton, Georgia. With a second, first and third place finish, Porto added 59 points, taking the lead of the championship. It was the first time that Porto achieved a podium results in the United States.

"My first podium in the category here, right on the first race, I'm very happy," said Porto. "The team gave me a very good car and I managed to overtake them already at the finish line. Winning right on the first weekend of the season is very rewarding and proof that the work in the preseason was well done. Thank God for everything, the DEForce Racing team, my coach Beto Monteiro, my family and everyone who cheers for me in Brazil.”Now it's time to celebrate.”

In Race 2, Porto started in second, as position are defined by the time of the previous race, but soon after the start, the Brazilian pilot took the first place, but fell back in position to before the checkered flag fell. 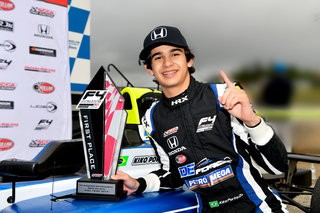 Dropping in the fourth place for the weekend finale, the Brazilian soon overtook third place in the race. In the sequence he was approaching the second place, a yellow flag and the entrance of the safety car prevented him from crossing the finish line in second.

"Another podium, adding three in the three races of the weekend is a lot of happiness. But I know that work has just begun, there are many things ahead of us. The season is just at the beginning," commented Porto, who took the lead in the F4 U.S. Championship after the first event.

The next round of the F4 U.S. Championship season will take place June 21-23 at the Pittsburgh International Race Complex in Wampum, Pennsylvania.