“I am really happy with how everything went this weekend” said Group-A Racing team manager Jonathan Scarallo. “It was a last minute thrash coming into this weekend, with no testing for David and no testing for us, with the car or on the new Hankook tires. We ran up front all event, lead a bunch of laps in race 2 and scored points in all three races with basically a rookie driver. David did a great job taking all the coaching, and the crew and engineering team did an awesome job, giving him a great piece as usual.”

Official race weekend kicked off on Thursday with the first official practice of the season in the morning. Group-A and Porcelli, who drove for the team last in a one-off event at New Jersey Motorsports Park,  came out of the gate strong with fifth quickest time. As the session was ending, Porcelli was collected by the ultra-fast Turn 1 in a single car incident that left the car in pieces. Group-A Racing put in a heroic effort to get Porcelli back out for final practice just three hours later. In the end, Porcelli finished Practice 1 in seventh and Practice 2 in 11th.

The next morning F4 US Championship teams experienced thunderstorms and flash floods in the Braselton, Georgia, area. This resulted in qualifying being cancelled and the grid for Race 1 set on practice times. Based on his best practice time, Porcelli lined up seventh.

Race 1 was tricky conditions with the track dry in some sections, but still very wet in others. Series officials called it a rain race, mandating all cars start on Hankook rain tires. Porcelli showed good pace in his Group-A Racing machine, defending his seventh-place spot for majority of the race until sliding back to ninth near the race closing. With that, he stayed focused and pushed forward to hold onto that position at the finish. On the last lap of the race, Porcelli laid a flying lap to place him third on the grid for Race 2.

Race 2 presented a great opportunity for Porcelli and Group-A Racing team, lining up inside of second row. The New Jersey native got a fantastic start to jump to the lead. Putting his head down, and on cold tires, Porcelli built a gap over the rest of the field in the opening two laps, while the rest of the field battled with one another. As the pack calmed down, cars teamed up to run down the leading Group-A Racing car. After showing so much promise leading a good chunk of the race, Porcelli finished ninth following a minor mistake that allowed a freight train of cars to pass at once.

Porcelli started a bit farther down the pack in 19th for Race 3. Yet again, he got a great start to move up two positions. The next lap, he gained another position, moving him to 16th by the end of the second lap. He started running down the pack in front of him when a full course yellow came out to help bunch up the field. On the restart, Porcelli cut through the field, gaining five positions in a lap and a half, before another yellow slowed his speed. Porcelli got another great start in his Group-A Racing car, gaining two more positions. The checkered flag fell the following lap, driving from a 19th place start to finish ninth.

“Heading into the first event at Road Atlanta I was anxious to see where Group-A-Racing and I would end up in the field” said Porcelli. 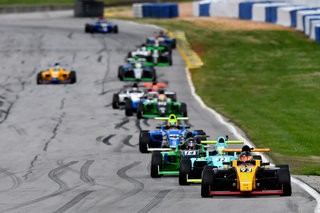 “I am really happy with solidifying three finishes in the points and leaving my mark on the championship leading laps in race two. I was truly honored by the work put in by Group-A-Racing. Plus, with my wreck, I drove different cars throughout the weekend! Group-A put in all the work necessary to give me a consistent racecar and keep me out on track and in a position to succeed. I now know that we are in a position to fight for this championship and we fully intend on improving our results in Pittsburgh and continue to bring the fight to this competitive F4 field.”

Group-A Racing has a seat available for the remainder of the season for part time or full season scenarios. Interested parties contact Jonathan Scarallo info@GroupARacingTeam.com 631-974-4379.