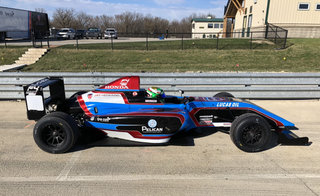 After three impressive years in Karting and a year of learning in Ginetta’s, the Silverstone based UK driver Jonny Wilkinson focuses all his attention into moving up the American ladder!

"Growing up in the town of Brackley I’ve always wanted to drive for the Mercedes AMG Formula 1 team however over the last 12 months I’ve been watching American racing   and IndyCar looks like a whole lot of fun!” Exclaimed, Wilkinson. “Racing with Jay will be a real help for me, a fellow Brit who flew across the pond to compete in America and eventually found himself in IndyCar so he knows what is required and I am looking to learn from him.

I started racing quite late compared to my peers having only done 3 years in Karting and 3/4 of a season in Ginetta Junior.  The F4 US Championship will be a big jump forward with huge grids and buckets of talent so it’s not going to be easy however me and the team are up for the challenge! I’m super excited to get going this season with Road Atlanta just 1 week away, I feel so lucky and hope to put on a good show!’

Through his short career in Karting Jonny won almost everything available, the only driver with a double Welsh championship to his name, along with the youngest ever Junior British Championship race winner and many seeds across his final two years.  Only 15 years of age but feels well positioned to be making a mark from the first lights out in Road Atlanta!

‘I would like to say a huge thanks to Jay Howard for giving me this opportunity as without him and all of the JHDD sponsors (CSU One Cure, Lucas Oil, NGK and Pelican Energy) we simply wouldn’t be able to make this happen! I’d also like to thank 360 Performance back at home for helping to prepare me for this season and in landing this awesome seat for the season.  Shout out to my Mum and Connor for everything and see you at Round 1 in a week!’

Jay Howard “ I am excited to complete our 2019 driver line up with the addition of Jonny. He has a good background racing in the UK and has done a great job in pre-season testing. Jonny took to the car immediately and fit in with the team seamlessly. The atmosphere and chemistry in our team is very important, I have a great group of young drivers and am looking forward to the season opener at Road Atlanta.”

Wilkinson is supported by 360 Performance, LTB Media and Tigerprints Teamwear.